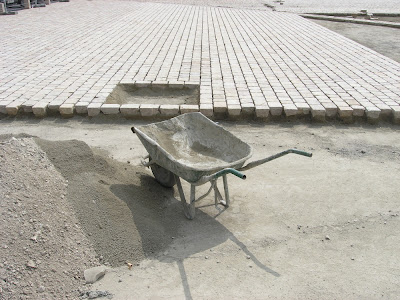 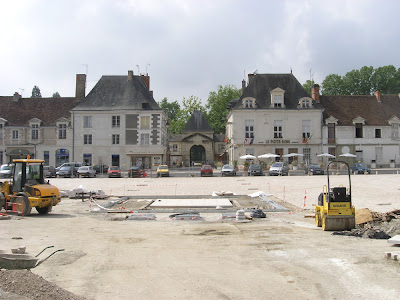 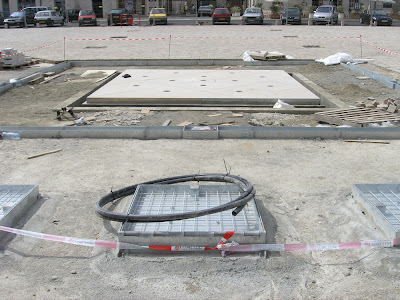 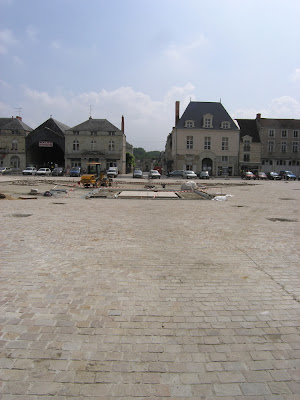 At the centre of the reorganised town market square, at the conjuction of the axes of the Grande Rue and the route de Loudun, there will be a GRAND FOUNTAIN set flush into the pavings. The twenty illuminated water-jets will be programmable by computer into both simple and elaborate patterns, and with varying durations of display. When not in use, the ground-level jets will allow other functions and events to be carried out across the entire square.
The paving is nearing completion with many metres of neatly-cut square setts from a quarry in Comblanchien, in Burgundy.
The carriageway tarmac will, we understand, have a further metallic coating to lighten the colour of the black bitumen, so that the contrast with the areas of tone paviours is less marked.
I am sure that everyone hopes that the number of cars parking-places can be restricted to the 'promised' total of 50 (ie 12 per side on the square), and that the cars themselves will not be allowed to block the four main visual axes of the composition as at present. While easy parking is attractive to everybody, cars should be constrained in fine urban squares such as the unusual matched pair found in Richelieu. Otherwise the insatiable desire for convenience will result in little more being achieved for the town than a stylish (and rather expensive) municipal parking facility.
The square will have many trees to provide shade in the summer; the HORNBEAM (carpinus betulus) has been selected. The new saplings will be planted in the right season, after the hot and dry summer period, to allow their first fragile year to be ideal in 'arboreal' terms.
The public pavement surrounding the square, now four metres wide, is already being used by the hotels, cafés and restaurants.
Posted by Abbé Henri Proust at Monday, June 11, 2007

Why must every Square fight not to be a car-park? Is petty convenience more important than a fine Square; humane theatre for public events? How many carriages and carts were parked in 1645? KEEP THEM OUT!

Nice pictures and I look forward to seeing the fountain working!