the full titles of the cardinal duc in 1642

Following the huge success of last year's greetings card, which saw €2000 being donated to the restoration of Tour St Anne, Alan Halliday has very kindly donated another image for this year's card.

The cards will be available from the end of October, priced €30 for 20 cards.

This book of building construction was first published in 1623, a decade before the completion of the cité idéale of Richelieu.

Maniere de bien bastir pour toutes sortes de personnes
was written by the architect and engraver
Pierre Le Muet.
click on his name for more biographic details!
Some  say that the hôtels particuliers of the Grande Rue of Richelieu were constructed to the principles and designs in this book
to a standard design required by the cardinal duc.
Each cost 10,000 livres tournois.
Pierre Le Muet - Batir pour toutes sortes de personnes by Howard Copping on Scribd
Posted by Abbé Henri Proust at Tuesday, October 11, 2016 No comments:

The Montmorency family became involved in one of the conspiracies against the régime of the cardinal duc led by the king's brother Gaston d'Orleans.  Henri II de Montmorency, Marshall of France and scion of the family, was a proven conspirator who finally went to the scaffold on the orders of Armand-Jean and Louis XIII; Richelieu had survived the plot!

In order to protect other members of the old aristocratic family, the surviving Montmorencys decided to make a peace offering to the all powerful cardinal duc on the understanding that the executions and retributions would cease with this single awful walk to the scaffold.  They knew well that the cardinal liked a good statue as he had bought many, both ancient and contemporary, to decorate his new château in Poictou. As they had sometime previously acquired the two 'Dying Slaves', famous 1513 sculptures by Michelangelo Buonarroti, they hoped that they could appease Richelieu by offering them to him as a gift.  The great man accepted them gracefully and placed the pair on the façade on his new castle, one on each side of his Grand Stair's block at first floor level.

Visitors might be reminded of their host's power and glory as they approached an audience with the First Minster of France.

Beauty and Threat in a single gesture...

In the Dôme in the Parc de Richelieu is a plaster cast of one of these famous statues; the original now re-located (after the Revolution) to the Louvre. 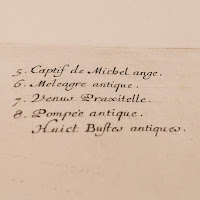 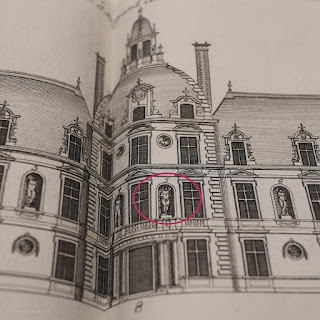 Origin of the slave statues
"The slaves were designed as part of the initial project for the Pope's tomb (in 1505), and Michelangelo began to carve them in 1513 when a second project was developed. A fourth, less grandiose project, elaborated after the pope's death, saw them rejected for financial reasons. Julius II, who had dreamed of a freestanding mausoleum at Saint Peter's in Rome, was buried in San Pietro in Vincoli in a wall tomb, albeit one adorned with Michelangelo's famous Moses (a contemporary of the Slaves). Despite being unfinished, the two great marbles were already admired. Michelangelo donated them to the Florentine exile Roberto Strozzi, who presented them to the French king.
The Slaves thus reached France during the sculptor's lifetime, and first occupied two niches at the Château d'Ecouen (constructed by the constable, Anne de Montmorency) before Cardinal de Richelieu took them to his new château in Poitou. The two Slaves had originally been intended to feature on the pope's tomb alongside similar figures, including the four marble Slaves in the Academy of Florence, carved (and also left incomplete) in 1531–32." 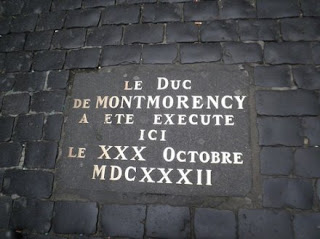