François Girardon and the tomb of Richelieu in the Sorbonne Chapel. 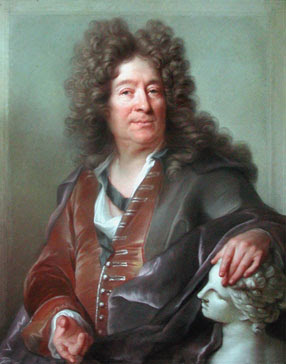 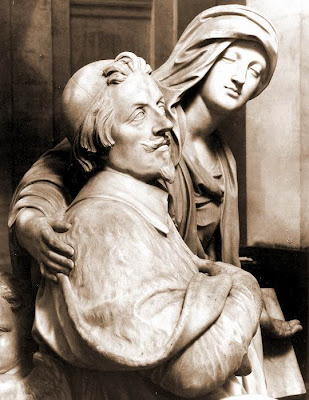 François Girardon (March 17, 1628 - September 1, 1715) was a French sculptor.
He was born at Troyes. As a boy he had for master a joiner and wood-carver of his native town, named Baudesson, under whom he is said to have worked at the chateau of Liebault, where he attracted the notice of Chancellor Séguier. By the chancellor's influence Girardon was first removed to Paris and placed in the studio of François Anguier, and afterwards sent to Rome.
In 1652 he was back in France, and seems at once to have addressed himself with something like ignoble subserviency to the task of conciliating the court painter Charles Le Brun. Girardon is reported to have declared himself incapable of composing a group, whether with truth or from motives of policy it is impossible to say. This much is certain, that a very large proportion of his work was carried out from designs by Le Brun, and shows the merits and defects of Le Brun's manner--a great command of ceremonial pomp in presenting his subject, coupled with a large treatment of forms which if it were more expressive might be imposing.
The court which Girardon paid to the "premier peintre du roi" was rewarded. An immense quantity of work at Versailles was entrusted to him, and in recognition of the successful execution of four figures for the Bains d'Apollon, Le Brun induced the king to present his protege personally with a purse of 300 louis, as a distinguishing mark of royal favour. In 1650 Girardon was made member of the Académie française, in 1659 professor, in 1674 "adjoint au recteur," and finally in 1695 chancellor. Five years before (1690), on the death of Le Brun, he had also been appointed "inspecteur general des ouvrages de sculpture"--a place of power and profit.
In 1699 he completed the bronze equestrian statue of Louis XIV, erected by the town of Paris on the Place Louis le Grand. This statue was melted down during the Revolution, and is known to us only by a small bronze model (Louvre) finished by Girardon himself. His Tomb of Richelieu (church of the Sorbonne) was saved from destruction by Alexandre Lenoir, who received a bayonet thrust in protecting the head of the cardinal from mutilation. It is a capital example of Girardon's work, and the theatrical pomp of its style is typical of the funeral sculpture of the reigns of Louis XIV and Louis XV; but amongst other important specimens yet remaining may also be cited the Tomb of Louvois (St Eustache), that of Bignon, the king's librarian, executed in 1656 (St Nicolas du Chardonneret), and decorative sculptures in the Galerie d'Apollon and Chambre du roi in the Louvre.
Mention should not be omitted of the group, signed and dated 1699, "The Rape of Proserpine" at Versailles, which also contains the "Bull of Apollo." Although chiefly occupied at Paris Girardon never forgot his native Troyes, the museum of which town contains some of his best works, including the marble busts of Louis XIV and Maria Theresa. In the hôtel de ville is still shown a medallion of Louis XIV, and in the church of St Remy a bronze crucifix of some importance--both works by his hand. He died in Paris in 1715.
Posted by Abbé Henri Proust at Friday, October 26, 2007