Alexandre Dumas is the author whose book 'The Three Musketeers' subverts the reputation of the historical cardinal-duc de Richelieu. Dumas' famous fizzing narrative needs a pantomime villain to serve the story and the cardinal-duc's portrayal fits right into this purpose.  And so popular is the book that few consider if his machiavellian and cynical portrayal was really deserved.  Another picture emerges if one reads any balanced historical text: the real Richelieu was machiavellian sometimes, but on other occasions quite visionary for his time and the turbulent context of the early 17th century.

Dumas has, of course, done a great favour to the little town of Richelieu, even if he links its creation the that 'literary stinker', the devious Armand-Jean du Plessis.


Better some publicity and reputation than none! 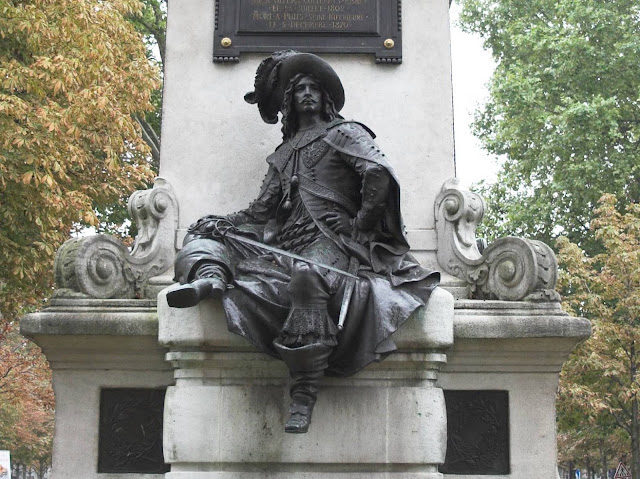 Posted by Abbé Henri Proust at Thursday, January 28, 2016 No comments:

The proposed 'green route' between Chinon and Richelieu


The existing but derelict railway line that connects the cité ideale of Richelieu and the historic Plantagenet fortress town of Chinon - home castle of Henry II and Richard Coeur-de-Lion, both kings of England - will soon be converted to a 'green route' for cyclists and pedestrians.  It runs along the picturesque valley of the river Veude and later upstream, the little river Mable.

Above a link to a video taken by drones that show the path of the new connection.

The cartouche by Tassin on a 28" square wall panel

While the Abbé Henri-Armand Proust lies in winter cold in the cemetery outside the walls of the cité idéale, he seems nonetheless to be keeping abreast with the latest in information technology and home decor.

He scanned his new copy of the Tassin plan of the town (engraved in 1630) in high definition (1200 pixels/inch) and used Photoshop to clean up around the cartouche. The original cartouche graphic itself is only about two inches square.

Then he made a dense jpg file.  He then sent this off to a company who can print digital files onto canvas and mount the result on timber stretchers. They did a grand job!

Here below the rather elegant results.

Do any of his parishoners want a similar panel for themselves? -  the Abbé can easily order more - maybe in support of the Fonds de Dotation and the imminent restoration of the so-called Tour Sainte Anne….

Other posts on M Tassin and his engravings

Posted by Abbé Henri Proust at Friday, January 15, 2016 No comments:

This project has now been almost completed on the exterior and now makes an enormous change to the feel of the place Louis XIII, originally the cattle market of the town, located behind the market hall, La Halle.

The square itself has been recently re-landscaped - all pleached lime trees and box hedges - with a refurbished fountain in the centre.

The four flanking ranges of elevations to the square are being steadily smartened up and restored, so this individual project makes an enormous difference. Unusually Bâtiments de France have permitted the restoration of a 19th century building - some sort of engineering works - admitting the 'rich palimsest' approach to the architectural history of the little town.

Someone* should now take on the restoration of the masonry of the neighbouring 'fausse porte' that acts as a scruffy interlude between to two recently restored buildings. The good Abbé understands that formerly the town's dog pound was located behind the locked central doors. Today there is a boxy sub-station hidden there behind.

It would be nice to allow curious visitors to go through to the banks of the Mable Canal, but statutory infrastructure is notoriously hard to get moved.

Someone said that the new building replaces a former burnt-out timber tobacco barn that stood on the site. So, for once, Bâtiments de France has accepted a post-17th-century non-masonry replacement, although I understand that the new owner was obliged to keep the same geometric form as the old utility building. Timber tobacco barn translates to a 21st century 'green structure', unique within the walls.
We hope the river Mable doesn't overflow its banks too soon, as in 2014.


The project advances. Click HERE for other posts of the works to this site.

Posted by Abbé Henri Proust at Monday, January 11, 2016 No comments: