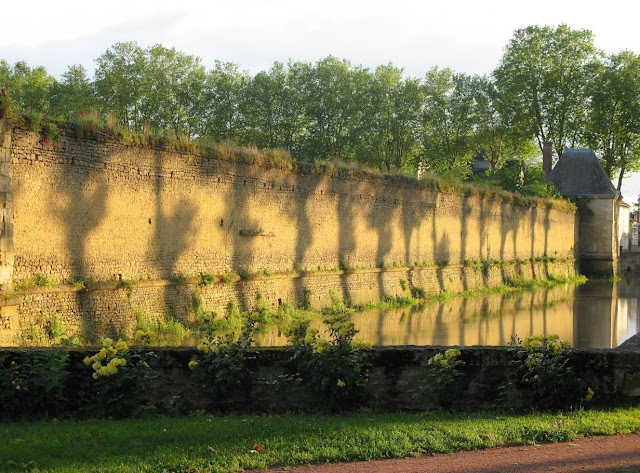 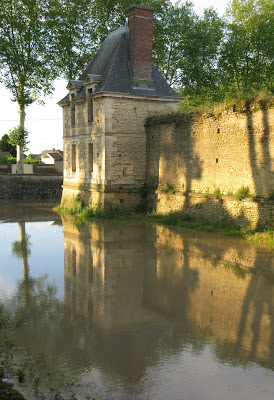 The floods of 20 June 2013 had one unexpected consequence; the town's moat - usually running nearly dry - was completely submerged, and we all could see a visual version of the town's walls that had not been viewed since the last flood; in 1952, they say.

While the moat and walls, originally paid for by the King Louis XIII at the foundation of the town, are impressive, the Abbé Henri P. now feels it is a shame that the original appearance of of the 'Walled and MOATED city' is seen so very rarely in the originally conceived condition. The most unencumbered stretch of the town's girdling wall is the part facing north-west, including the so-called Porte de Chinon.  This situation is because the space inside the wall at this point was for most of its life since the 1640s, not minor houses as elsewhere, but a large nunnery.  The service alley that runs round the three other sides of the town does not exist in this stretch, and so no houses came to be built against the wall on the inside face.  Today it is the site of the town's multi-purpose hall. As a result the exterior moat has not been encroached with 'structures' and 'gardens' as elsewhere.

20th June - Midsummer's day - meant that the sunbeams of evening (maybe at 21 00h) washed the old north wall and towers with yellow light and long shadows.  Shadows of the fantastical plane trees that shelter the little town from the prevailing wind.

The last coincidence for a photographer - the calm and pretty reflections on the surface of the water
mask the turbidity of the muddy water of the flood. 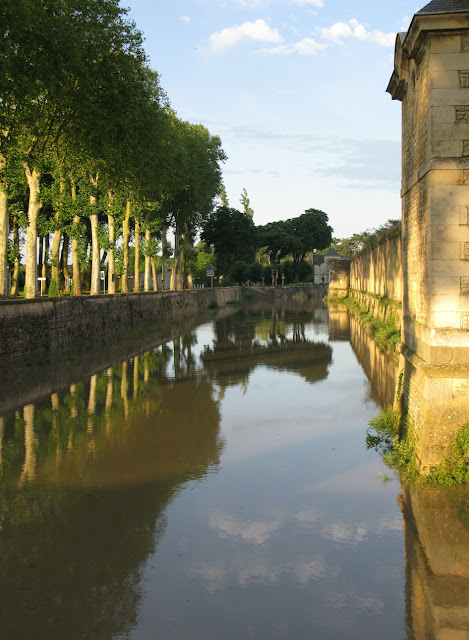 The classic car rally called the Grand Prix de Tours took place over the weekend of 14-15-16 June 2013. The three-day event started with a meet-up in Tours, followed the next morning by a Rallaye 'avec roadbook' that took the cars on a long circuit of Touraine.  The ballade, which stopped for lunch in the parc domainal of Richelieu, ended with a formal dinner at the château of Villandry for all the participants.

The domainal park of Richelieu is ideally suited as a destination for such vintage car rallies, and it was picturesque to see not only the wonderful old cars but the re-animation of the lonely park as it received 500 people to a fully catered luncheon on the grass.  The isolation of the town at the junction of Touraine and Poitou means that the roads about are largely empty, and 'motoring' can still have the qualities that made for the pleasures of the 1950s - pleasures of the decades that manufactured many of these lovely old cars. 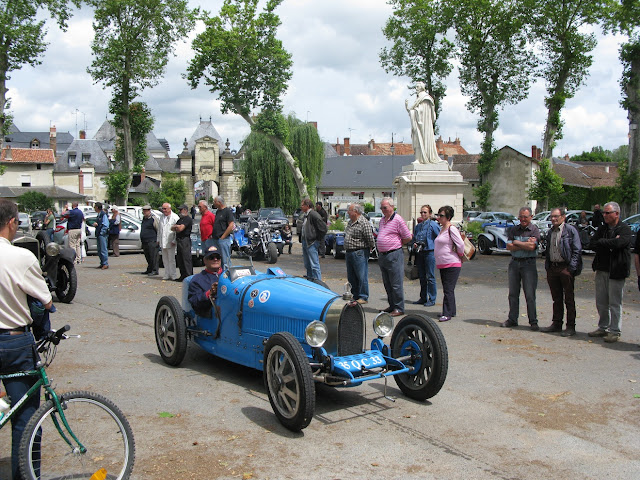 Richelieu is flooded by the River Mable

On the 19 June 2013 there was a torrential storm over the cité idéale.  It only lasted a couple of hours but, on the 20th - 24 hours later, all that rain from the wide valley up-steam of the  town collected itself and was concentrated into the narrow river Mable - normally a stream - that flows past the town and feeds the moat of the walled city.  Straight through the majestic waterworks of the old château, it tried to flow away into the river Vienne (15km away), and thence into the 'mighty' Loire (30km).  Flooding was limited to the eastern side of the town, close to the rivers natural bed, but cellars throughout the town were filled and needed to be pumped out later by the Sapeurs Pompiers.  Water depths in places were a metre deep.

The last time that the town was flooded by the river Mable was in 1952, when the innundation reached the steps of the church (on the western side of the town).

The town's dwellers helped each other clear up and improvised getting the water out with water-vacuum-cleaners and any squeegee to hand to help scrape up the mud.