the next fesitival of CAPE AND RAPIER 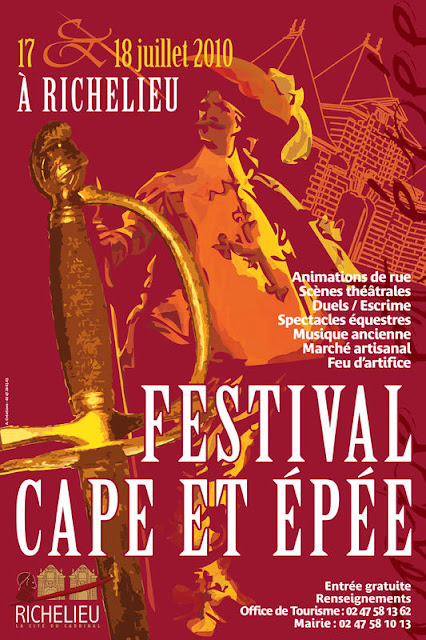 The biennial festival that relives the fantasy of the 17th century of the world of 'The Three Musketeers' takes place on the weekend of 17-18 July 2010.
Henri Proust has attended the most recent three 2004, 2006 and 2008; each more successful than the last, as the crowds grow for this wonderful village fête magnifique.
DO COME IF YOU CAN
-
From Near or Far
-
(hallo Maxim in St. Petersburg!)
***
Posted by Abbé Henri Proust at Tuesday, June 15, 2010 No comments:

The town of Richelieu is built of the staple materials of the 17th century in Touraine; chalky fieldstone rubble, tuffeau - a very soft whitish limestone, barely more than compacted chalk - and various pierres dures - hardstones - for use in locations where tuffeau's water absorbtion is a problem.  This problem is mainly in foundation work and the first couple of courses above ground level, as can be seen in a change of stone work at low level on all but the humblest constructions.  With slate or tile roof on a oak or chestnut timber charpente, this forms the materials palette of the provincial 17th century.

However (and obviously) the town lived through the aesthetics of the 18th, 19th and 20th centuries too, and some of their favourite styles can be found in adaptations to older buildings.  Here, in the dappled light of a hazel nut tree, is a typical piece of 19th century polychromy.  Tuffeau blocks interchanged with five red-brick courses, all embedded in  a much older rendered rubble wall of a rear extension building.

Often the results of this stylistic mélange seem very pretty..... 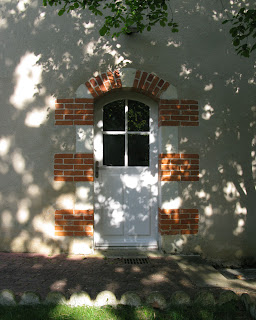 It may be a motif that is more eighteenth century than nineteenth, as one can see the idea illustrated at the fantasy farm created for Marie-Antoinette at Versailles in the 1780s. 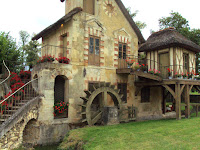 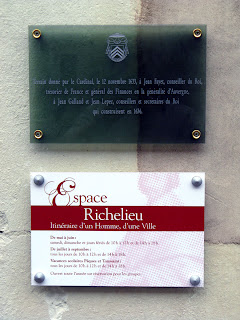 
The Abbé will shortly add pictures of the interior, once he actually gets through the door! 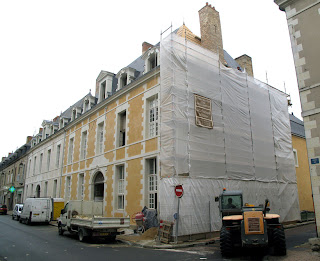 The newly-restored façade of the corner hotêl particulier,16 Grande Rue, has emerged from its scaffold.  The yellow ochre render that has been used is in contrast to the more muted palette that has been the norm in recent Richelieu restoration projects.  This colour echoes that used in the restoration of the Cour des Offices at Fontainbleau.  This metropolitan project was illustrated on this blog last year. 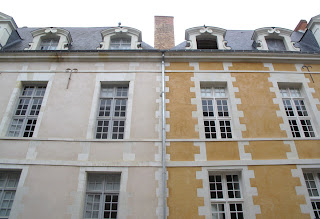 The woodwork will be painted in a mid warm-grey rather than the more normal gris de perle or even the even lighter reflets de perle. 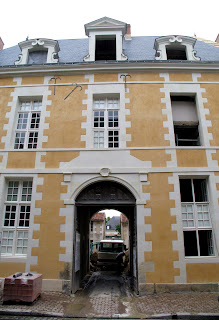