Creating iconic images of the town of Richelieu

This blog tries to bring the architectural marvel of the cardinal's still existing cité idéale to a wider public, especially the world of les anglo-saxons.  One part of this objective is to put beautiful imagery of the town into the public realm, especially imagery that is free of any copyright fees, so that any casual reader can help these efforts of 'publicity and propaganda'.

There are many many photos on the blog which describe the town, and as they are mainly taken by the author, Abbé Henri Proust, they can be used without fear of copyright pursuit.

The Abbé has other skills as well as pastoral care of his flock and digital photography; today we offer his skill in CAD (computer assisted design), digital rendering and photo manipulation.

Below are three versions of a view a computer model of the town viewed from the south, rendered and tweeked in Photoshop.  They show the cité's church, the Châtellerault gate and the Halle viewed from the cardinal's parc, looking down the town's central axis, on the horizontal plane.

Click on the image to see a larger version.

These images are easily downloaded and are quite detailed...
***

Posted by Abbé Henri Proust at Friday, September 09, 2011 No comments: 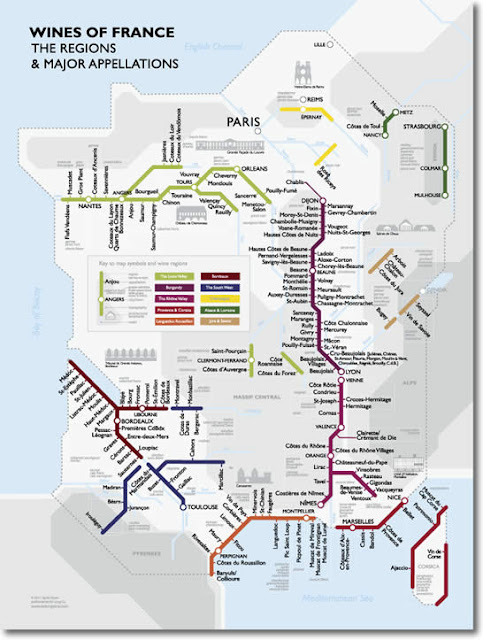 an interview with David Gissen 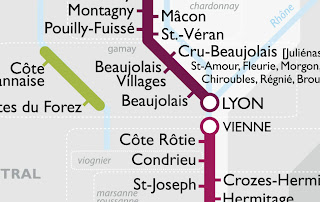 Posted by Abbé Henri Proust at Friday, September 09, 2011 No comments:

The Association Richelieu XVIIe-XXIe was set up by a group of local enthusiasts of the cité idéale who hope to make a contribution to the recent developments and restorations, and in particular to provide a conduit for private patronage and finance of aspects of the town that have fallen into dereliction or general neglect.
In their first year of 2009 they hoped that they could stimulate and inspire the restoration of the Porte de Chinon, the northerly gate of the town.  It was thought that this neglected structure, in the stewardship of the municipality, could be restored in such a way as to provide a truly iconic image for the town that might encapsulate the splendid and picturesque qualities of the cardinal's concept though modern digital media, now so important in the 21st century.  They remain hopeful that the attention lavished on this structure will finally catalyse a project for its comprehensive restoration.

The Mairie has apparently  responded  positively to the idea of the digging-out of the moat at this point to make watery base to the composition of the gate, gate-houses and the flanking town walls.  One day soon....

In 2011, their attention is now drawn to a more modest objective: the restoration of the 'false gate' to the town; one of the 6 original gates that were constructed, but the only one that did not lead to a thoroughfare and on to a destination, as it was blocked by the huge ducal hunting parc.  This High Baroque composition at the end of the vista from the Loudun gate is designed with a scale and flamboyance that make it imposing even at the distances at which it will be perceived - often several hundred metres. Behind today's humble timber gate are sluices to the Mable river that encircles the town, a bridge into the parc and a more recent electrical sub-station.

On the right hand side the gate's original 'pepperpot' has just been carefully improved will the full rigours of Bâtiments de France and their magnificent representative architecte. The left-hand pepperpot has been absorbed into a later structure - a works - apparently recently sold and bought. This bit of dereliction needs a little action, please!

This gate has a very strong presence as it lies on the EW axis of the place du Marché.  It is probably the most Mannerist element in the town's design. In its own way it is bien grandiose.

We all hope that the Association Richelieu XVIIe-XXIIe will find more traction for this project than they did with the Porte de Chinon, and that their Association can propose and execute a real benefit to the town as a calling card to larger projects and propositions in the future.


Posted by Abbé Henri Proust at Thursday, September 08, 2011 No comments:

mpdf
CLICK HERE for an article on the town's acquisition of the 'Grand Colbert'...

click here to make a financial contribution to the project.... 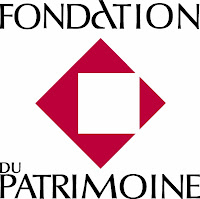 The project is being financed by, amongst others, the FONDATION DU PATRIMOINE which is a French organisation that has been set up to support important redevelopments or restorations that fall outside the normal boundaries of projects that are the direct responsibility of the State.  While it is directly assisted by many corporate patrons, even Mme. Bettencourt of L'Oréal - 'Europe's Richest Woman' -  it welcomes donations by any individual, and has set up the means to receive these funds - see 'click here' above! 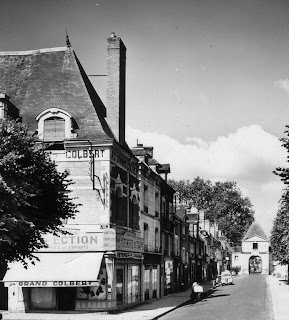 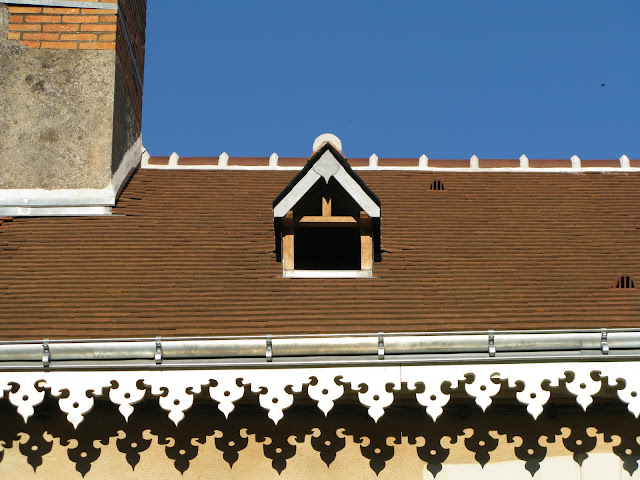 This photo shows a roof at the southern end of the rue des Galères that has just been restored.  In this particular case it has been carried out with new red tiles and shiny new zinc guttering in the local Touraine manner.  In the hard afternoon sunshine the 19th century style gutter-board casts a hard shadow on the crepi of the wall beneath.  The new lucarne - rooflight - is left open to ventilate the roof-space which looks too low to be much more than a storage attic.  The ridge tiles are pointed in the Touraine manner with little mortar crests.  Time, algae and moss will soon 'distress' the pristine project, but at the moment it looks almost too good to be true.

The Abbé Henri Proust started this blog in part to convince himself - and then others - that the little 'lost' town of Richelieu really was a dynamic and living community. He hoped that this seemingly improbable fact would be confirmed by new projects and reconstructions taking place within this tranquill historic setting.  To his amazement, the blogging task has shown that this hope is in fact realised - since 2004 the rate of restoration has really ramped up, and today continues at a frenzied (but  tranquill) pace, more that anyone might expect from a casual visit.  The municipality has recreated one of the town's two squares, several of the hôtel particuliers on the Grand Rue have been saved from pathetic dereliction, the town now has two - yes two - museums to entertain and inform their visitors.  Two of the grand pavilions on the place du Marché have been restored or are in the course of restoration.  Very soon the Halle will undergo a full restoration of its roof....


Even humble roofs are being restored....

The only existing building directly by the hand of the King's premier architecte, Jacques Lermercier, is the church, Nôtre Dame de Richelieu, on the place du Marché.  The rest of the town's original major edifices are to designs prepared by his brothers or Jean Marot, the well-known 17th century architect/engraver.  The grandiose ducal château itself, also by young Jacques, was finally demolished in the 1830s.

A curious fact is that this church faces West, i.e. the sunset, rather than the city of Jerusalem to the East, the direction of sunrise and, by analogy, resurrection.  When Jacques' English contemporary royal architect, Inigo Jones, was faced by a similar layout problem in the plans for the new Covent Garden in London, he ensured that the altar of the actor's church, St Paul's Covent Garden, actually faced east but had a ceremonial portico facing west  onto the square (under which Audrey Hepburn was to frolic as a London flower-seller in 'My Fair Lady'). So why would a cardinal of the Roman church endorse such symbolic laxity?  Where is Dan Brown when you need him?

The town of Richelieu has a fine cinema within the walls that is run by local enthusiasts of the movies.  It is called the Majestic. It is accommodated in an old warehouse that lies in the backlands of one of the former houses at the foot of rue Henri Proust.
The town council supports the cinema.  It is really a delight to visit, with lovely (clean) seats and good modern projection equipment.  Country people from all the hamlets and villages that surround the cité idéale drive in by car to see the latest French and international films.  Sometimes it is used for theatrical presentations as there is a modest stage behind the screen.

To allow the addition of new facilities, including digital and 3-D equipment, the buildings on the street itself are now under restoration.  Here are a couple of pictures showing the works at the end of August 2011.
HERE is another post on the cinema

Check this site out if you are considering selling your maison secondaire and incurring a capital gain.  This new and latest tax adjustment does not only apply to English second home owners, as did the former cunning tax-raising suggestion recently dismissed. 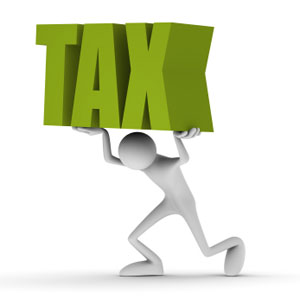 The hotel located on the main place du Marché has acquired the property to its rear and now includes the entire hôtel particulier - or mansion - located next to the Châtellerault gate that leads from the ville idéale to the duc's domainal parc.  The restoration works are now well under way, and we show pictures of recent stages of the construction phase.
The hotel seems to be prospering and the additional rooms that will be provided (and indeed the new lift) will increase the hotel's income and commercial viability. 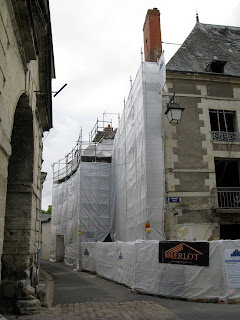 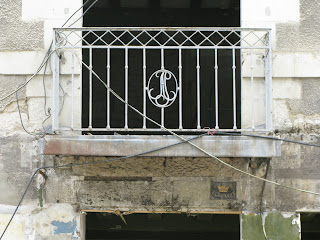 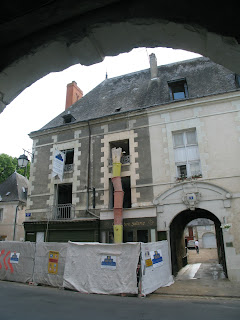 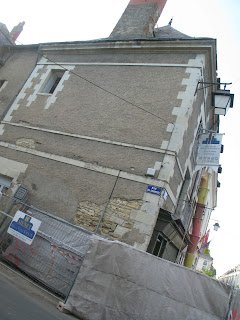 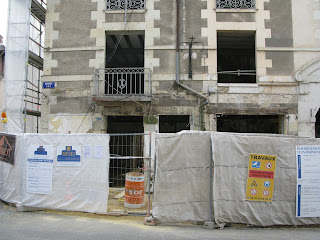 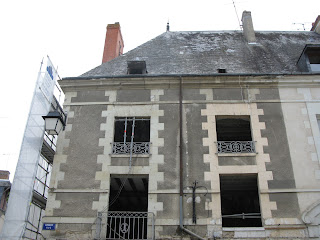 No doubt, the works will be under the detailed scrutiny of the town's dragon of the STAP and architecte des Bâtiments de France, Mme. Adrienne Barthelemey, who will ensure that the restoration of such an important element of the town's architecture will ratchet towards the hoped-for emphasis on the original designs of the 1630s, created by the brothers Lemercier for the cardinal and King Louis XIII.