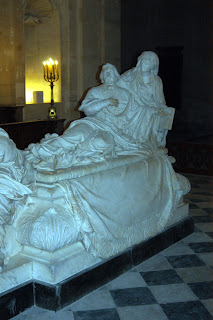 The marble tomb of Richelieu in front of the Altar of the Chapel of the Sorbonnne in Paris. It was sculpted by François Girardon in 1675. 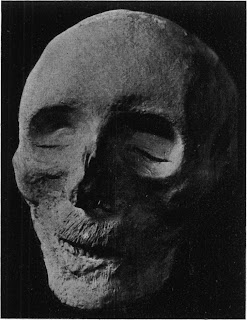 The mummified head of Richelieu photographed in 1895. The situation is described in the article below. Click anywhere on the article's image to read it more easily. 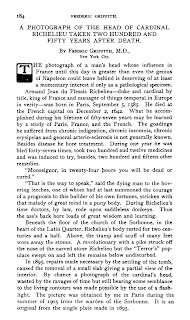 During the French Revolution, Richelieu's body was removed from its tomb for reburial elsewhere, and the mummified front of his head, having been removed and replaced during the original embalming process, was stolen. It ended up in the possession of Nicholas Armez of Brittany by 1796, and he occasionally exhibited the well-preserved face. His nephew, Louis-Philippe Armez, inherited it and also occasionally exhibited it and lent it out for study. In 1866, Napoleon III persuaded Armez to return the face to the government for reinterrment with the rest of Richelieu's body (Murphy, 1995).
Posted by Abbé Henri Proust at Tuesday, August 28, 2007

How marvellous! He still looks very handsome in the photograph, although evidently emaciated. He suffered so terribly for so many years (tuberculosis in the intestines, arm and lungs; strangury from the gonorrhoea he contracted as a teenager; anaemia caused by his doctors as much as by his illnesses), but his expression in death is very serene. I think Philippe de Champaigne's deathbed portrait of him, and the seated one, are the best likenesses: the standing portraits by him don't really capture his personality, and seem to make his hair too grey. In the deathbed portrait, it;s clear there was still a lot of black in it.