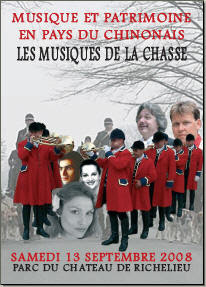 Below we show the agenda for the summer months in Richelieu.
NOTE the 'Festival of the Cape and Rapier' on the 19 and 20th July and the popular new Music Festival held in the Dome of the old Château at the end of July and the beginning of August.

NOUVOFF0006 - Upload a Document to Scribd
Read this document on Scribd: NOUVOFF0006
Posted by Abbé Henri Proust at Wednesday, June 25, 2008 No comments:

Most of our French neighbours feel there is little point buying wine from outside the all-encompassing vineyards of the long Loire valley. Red, white, rosé, sweet, dry, sparkling, botrytised (?) all from local yokels (usually a 'cousin')!
This web site gives a very quick run down on the various wines complete with temperature recommendations - usually carelessly overlooked in the rush to get the bottle opened.
Posted by Abbé Henri Proust at Wednesday, June 18, 2008 No comments: 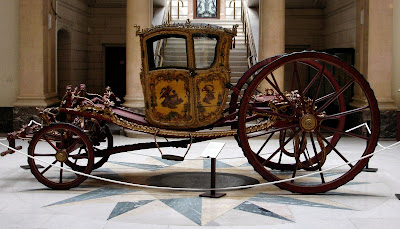 This is a 'Gala Coupé' carriage from the seventeenth century that is in a museum in Brussels. Could a good coachman steer one of these into the gate of a Richelieu 'hôtel particulier', or were the entry gates more for farm carts than grandiose sets of wheels like these?  Probably it would be more at home at the château fore-courts with their larger turning circles.  In the period of The Three Musketeers it was thought effeminate for a gentleman to travel by coach as he should be in the saddle - hence the high boots of the cavalier's outfit.  The unspeakable but dainty Madame de Winter in contrast travels by coach. It was only in the era of Louis XIV that the manly riding boot gave way to the dinky court pump and silken stocking of Versailles and Vaux-le-Vicomte.  The authentic booted cavalier's costume below dates from 1630. 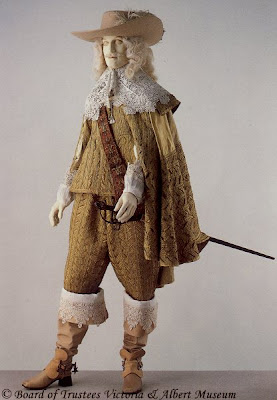 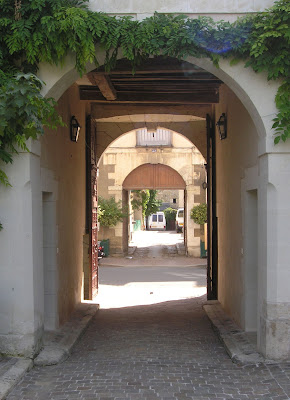 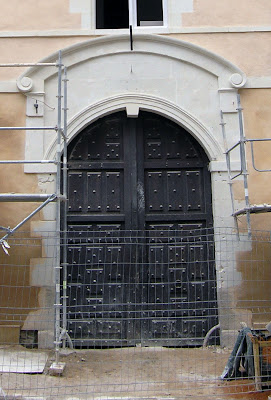 Most of the large houses in Richelieu are fitted with a standard design carriage gate that gives access to the court behind.  These monster oaken gates allow the passage of a carriage with two horses (plus postillion) or a mounted rider.  As the main gates are so large, a pass door is provided for general foot passage, and this is fitted into one of the main leaves.  The design is adapted to suit various heights of opening, sometimes with the top panel fixed, sometimes with it integral to the main leaves.  There are one or two gates still from the 1630s, but most must have been recreated to the original design.  As 1630 is  380 years ago, most of these doors may have been replaced more than once. 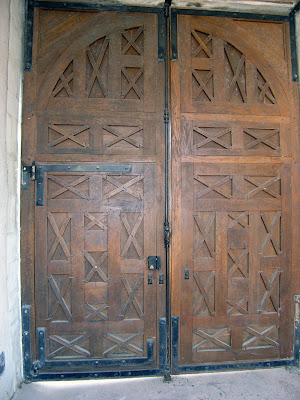 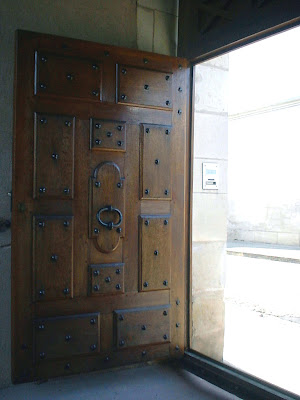 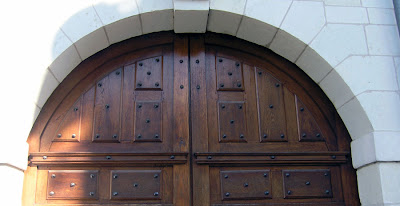 The two drawings below have been recreated in digital format from a hand-drawn set produced in 1943 (presumably during the occupation of Richelieu by the German army) by a certain J. Brandon of the Centre de Recherches sur les Monuments Historiques. 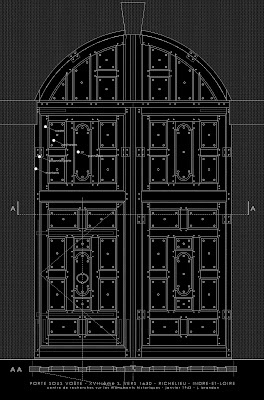 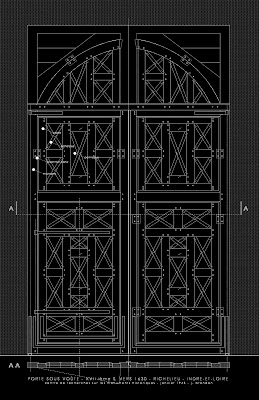 Double/right-click on the drawings and they will come up nice and big in their own window.
This is true of all this blog's images, which are about 900 pixels wide on average at 72dpi.
Posted by Abbé Henri Proust at Thursday, June 12, 2008 2 comments: 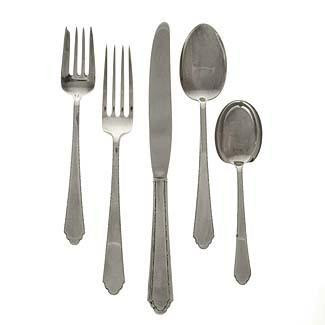 1637: Perhaps weary of watching dinner guests picking their teeth with the points of their daggers, Cardinal Richelieu orders the blades of his dinnerware to be ground down and rounded off. Et voilà, the modern dinner knife is born.
Prior to Richelieu's flash of inspiration (or simple revulsion at bad manners), diners typically used hunting daggers to spear their morsels, which were then conveyed to the mouth by hand or with the help of a spoon. The fork, the implement that really revolutionized chowing down, had existed since biblical times. Despite its utility, however, the fork remained a relative rarity in the West until the 17th century, even among the French royals that Richelieu served with unswerving devotion.
Richelieu's knives became the rage among the court and soon everyone who was anyone in France had a set. The dinner knife became commonplace throughout France after Louis XIV -- who, like most kings, had his own reasons for not wanting sharp blades and pointed tips around -- decreed its universality. Soon afterward, the dinner knife found its way throughout continental Europe to England and, eventually, the American colonies.
It's fitting that the table knife helped refine table manners at the French court. If the French didn't invent good manners (and they didn't: the ancient Egyptians instituted a code of behavior during the Fifth Dynasty), they at least gave the world étiquette, the five-franc word that's synonymous with refined behavior.
Cardinal Richelieu, of course, was more than a simple cutler. As Louis XIII's chief minister, he was no stranger to using sharp implements to influence geopolitical events.
His policies transformed France into a powerful state, bringing it into direct conflict with the House of Hapsburg and the Holy Roman emperors. Allying Catholic France with the Protestant Swedes in the Thirty Years' War, Richelieu looked on as sword-wielding mercenaries laid waste the tiny neighboring German states, helping fuel the grudges that set the stage for modern European history.
Posted by Abbé Henri Proust at Wednesday, June 04, 2008 1 comment: