Only one year ago, the town of Richelieu signed a twinning agreement with the Chinese city of Wuzhen. The numerous studies that have just taken place for three days with the presence of a Chinese delegation led by Zhu Mingjie, suggest that trade and friendship can be particularly promising and long-term.

The Twin Cities are interested in building co-operative and exemplary relationships. Notably on the occasion of the fiftieth anniversary - in 2014 - the opening of diplomatic relations between the two countries by General de Gaulle.
The program devised by the municipality of Richelieu for its guests was particularly dense and  appealed to many the participantss. Among them, were representatives of the University of Tours and the Rector of the Sorbonne in Paris. The tourism development projects and possible economic impacts were naturally at the center of exchanges and visits. The museum, the City, the Park, the wine area of ​​Garrelière, the truffles at Marigny-Marmande, but also available was the former Jean-Mermoz school buildings were part of a very popular marathon ... and all very much photographed! Not to mention a Gala evening in the company of Templerie of Flowers and Truffles and a reception at the castle of Rivau.
On the last day, the group, accompanied by Mayor Hervé Novelli, was received in the Senate in Paris by Jean -Pierre Raffarin, former Prime Minister and an expert on China. François Weil, President of the Academy Française, and Xudong Jin, from the Chinese Embassy, attended the meeting to sign a memorandum of co-operation .

Exchanges before the summer comes

The coming months will be very rich. Chinese media students will come to Richelieu this summer 2014. In May, the town of Wuzhen will present an exhibition on Richelieu and at the same time receive a delegation from Richelieu. In return, the Éspace Richelieu will host an exhibition on the Chinese twin city this summer.
A significant development around multiple co-operation projects could be a tremendous asset to the people of Richelieu.

Wuzhen is a small Chinese river town built entirely around canals, located near the city of Tongxiang. Its population is 60,000 inhabitants, of which only 12,000 or so are permanent residents.
Founded in the ninth century by the Tang dynasty, it was completely renovated in 2000 and is classified as a World Cultural Heritage site by UNESCO. For ten years, tourists have flocked there.  Several million each year!
Although of very different population levels, Richelieu and Wuzhen have many cultural and historical similarities.
The Chinese delegation included the deputy mayors of both Wuzhen and Tongxiang, as well as those responsible for tourism and economic development of the international tourist area of ​​Wuzhen.

Look on the map on the right-hand column for a Google Earth view of Wuzhen..
Posted by Abbé Henri Proust at Monday, December 30, 2013 No comments:

Two sons of the Abbé Proust belt out 'Hark the Herald Angels Sing'
as boy choristers  in the choir of St. Paul's Cathedral, London 2000
under the meticulous direction of Mr. John Scott,
the
'Eminence Ginger'.

which translates from Latin as

Here in its foundations lies the architect of this church and city, Christopher Wren,
who lived beyond ninety years, not for his own profit but for the public good.
Reader, if you seek his monument – look around you. Died 25 Feb. 1723, age 91.

Merry Christmas to all the Abbé's readers & chums

A Belgian entreprise at Faye-la-Vineuse

Posted by Abbé Henri Proust at Friday, December 20, 2013 No comments:

The last self portrait of van Dyck

Just as the town and castle of Richelieu were being finished in 1641, poor Anthony van Dyck died  in London, over la manche, aged only 42.  Court painter to the to-be-chopped Stuart King, Charles 1; contemporary British monarch to Louis XIII, the loyal and royal husband to the the French king's Louis' sister, Henrietta Maria.
Anthony van Dyck was the opposite number to Armand-Jean du Plessis de Richelieu's court painter, Philippe de Champaigne.  Both painters from the Spanish Netherlands; both painters to  the nobility and image-makers of the National myth. 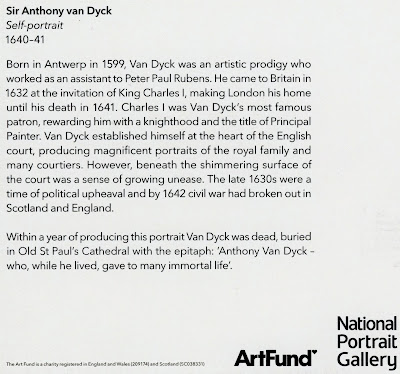 This portrait is the subject of a public appeal to prevent some Yank(?) adding it to his boring private investment collection.  Six million quid (more?) in contributions please….