The introduction to 'Cinq Mars' by Alfred de Vigny 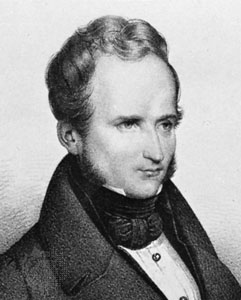 Alfred de Vigny 1797 - 1863
***
"Cinq Mars"
or
"A conspiracy under Louis XIII"
This book written by Alfred de Vigny and published in 1826 starts with a bewitching description of Touraine.
Many say that it has the best portrait of the all-powerful cardinal duc de Richelieu, although every literary portrait seems to have its own political agenda, this one born of the 1820s.
"Do you know that charming part of our country which has been called the garden of France—that spot where, amid verdant plains watered by wide streams, one inhales the purest air of heaven?
If you have travelled through fair Touraine in summer, you have no doubt followed with enchantment the peaceful Loire; you have regretted the impossibility of determining upon which of its banks you would choose to dwell with your beloved. On its right bank one sees valleys dotted with white houses surrounded by woods, hills yellow with vines or white with the blossoms of the cherry-tree, walls covered with honeysuckles, rose-gardens, from which pointed roofs rise suddenly. Everything reminds the traveller either of the fertility of the land or of the antiquity of its monuments; and everything interests him in the work of its busy inhabitants.
Nothing has proved useless to them; it seems as if in their love for so beautiful a country—the only province of France never occupied by foreigners—they have determined not to lose the least part of its soil, the smallest grain of its sand. Do you fancy that this ruined tower is inhabited only by hideous night-birds? No; at the sound of your horse's hoofs, the smiling face of a young girl peeps out from the ivy, whitened with the dust from the road. If you climb a hillside covered with vines, a light column of smoke shows you that there is a chimney at your feet; for the very rock is inhabited, and families of vine-dressers breathe in its caverns, sheltered at night by the kindly earth which they laboriously cultivate during the day. The good people of Touraine are as simple as their life, gentle as the air they breathe, and strong as the powerful earth they dig. Their countenances, like their characters, have something of the frankness of the true people of St. Louis; their chestnut locks are still long and curve around their ears, as in the stone statues of our old kings; their language is the purest French, with neither slowness, haste, nor accent—the cradle of the language is there, close to the cradle of the monarchy.
But the left bank of the stream has a more serious aspect; in the distance you see Chambord, which, with its blue domes and little cupolas, appears like some great city of the Orient; there is Chanteloup, raising its graceful pagoda in the air. Near these a simpler building attracts the eyes of the traveller by its magnificent situation and imposing size; it is the chateau of Chaumont. Built upon the highest hill of the shore, it frames the broad summit with its lofty walls and its enormous towers; high slate steeples increase their loftiness, and give to the building that conventual air, that religious form of all our old chateaux, which casts an aspect of gravity over the landscape of most of our provinces. Black and tufted trees surround this ancient mansion, resembling from afar the plumes that encircled the hat of King Henry. At the foot of the hill, connected with the chateau by a narrow path, lies a pretty village, whose white houses seem to have sprung from the golden sand; a chapel stands halfway up the hill; the lords descended and the villagers ascended to its altar-the region of equality, situated like a neutral spot between poverty and riches, which have been too often opposed to each other in bitter conflict." 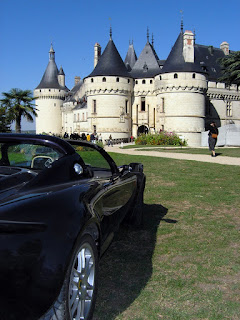 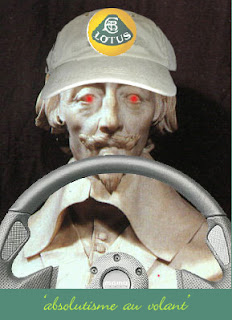 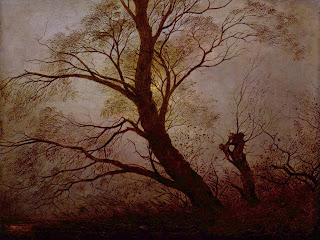 - le Plan Local d'Urbanisme -
(or PLU)
The development plan for the Cité Ideale de Richelieu and its modest conurbations has been the subject of reconsideration and updating by the minicipality.  The policy results have just been published by the townhall for public consultation.
Until today's revisions, the planning directions for the town were the consequences of a policy of protection outlined in the 1960s and 80s.  This new 2010 revision brings these policies up-to-date and corrects those aspects of development policy that were found to be either counter-productive or to have unforeseen negative qualities.
But when? - O when? - are they going to complete the longed-for by-pass sector whose alignment is established but incomplete.  Meanwhile every Euro-truck in France grinds past the walls of the town.  Look at page three below to see the problem.
***
click on each image if you want to read on.... 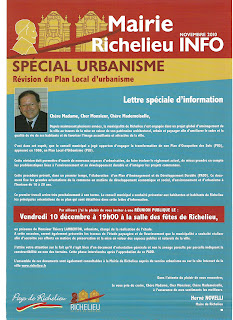 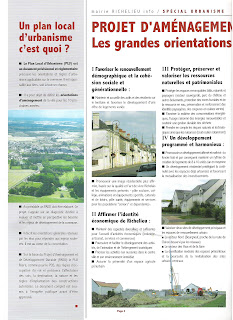 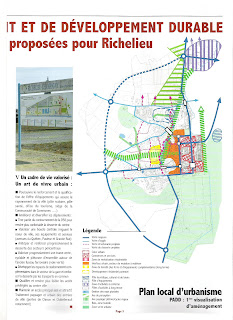 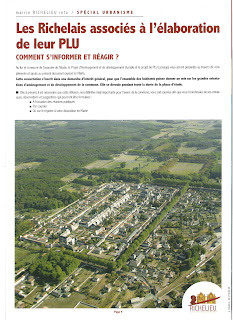 Our Mayor - no longer a secretary of state after Sarko's reshuffle

With the reshuffle of the cabinet of President Sarkozy on 14 November 2010, our Maire,
M. Hervé Novelli, now only the


found himself out of a post.  He remains a member of parliament and of course, much the most significant for us,
Mayor of Richelieu.
It is not easy to remain at the pinnacle of power in the centralised French state.  The more impressive that Armand Jean cardinal duc de Richelieu stayed at this sharp pinnacle for more than twenty years, albeit in the seventeenth century.  But not so bad either for M. Novelli to be compared with his great predecessor.
***
http://news.bbc.co.uk/1/hi/8580276.stm
http://www.telegraph.co.uk/news/worldnews/europe/france/5624611/Sarkozy-appoints-Mitterrand-nephew-to-cabinet.html
http://www.europarl.europa.eu/members/archive/alphaOrder/view.do?language=EN&id=4357
http://en.wikipedia.org/wiki/Hervé_Novelli
http://www.herve-novelli.com/
http://www.concurrences.com/cv.php3?id_auteur=1688&lang=fr
http://www.flickr.com/photos/novelli-2010/
http://www.ville-richelieu.fr/
•••
Posted by Abbé Henri Proust at Wednesday, December 01, 2010 No comments: