The new Fountain in the place du Marche 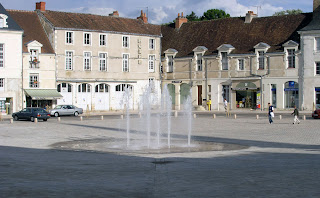 The new fountain on the cross axis of the square was opened on Bastille day 2007. It makes a very strong new feature in the town and will we hope be matched by another in the other square, the places des Religieuses, in due course, when the layout of that square is made to match - 'One for the King; one for the Cardinal'. Although some local folk say that this fountain is not like the old one, too modern, too axial, too.........zzzzzzzz........, the children and anyone with their head screwed on loves it. I myself have danced the jets and it is really hard to stay dry... When the entire sqaure is needed, the illuminated jets are switched off and the place du Marché can be used with an uninterrupted open space.

Bentley and Rolls Royce in the Park and Square 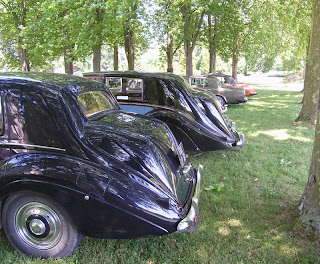 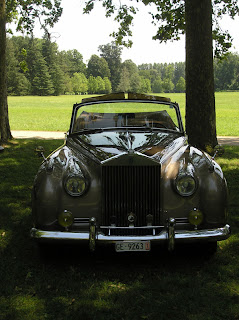 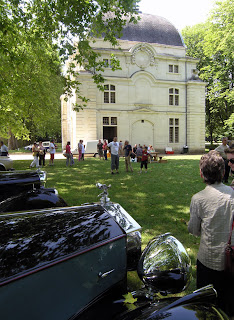 On Sunday the 15 July 2007 as part of the Festivities for the opening of the town's recreated place du Marché, the proud owners of these grand cars met in the new square. It must be said and admitted that not all the cars were oil-tight!! Then on for a picnic luncheon by the Dome in the domainal park of the Château de Richelieu. Would the Cardinal have used a chauffeur and thus trusted his transportation to the Company of the twin Rs? Or would he have taken the steering wheel himself and purchased the stallion of the road, the BENTLEY? Or perhaps in a more Chauvinist style, a Delage, a Bugatti or even a Hispano-Suiza - sound products of des Bons Français!
We hope that the visit might become an annual event with the attendance of more motors of all the vintages, including those from between the two wars, and even those from before the Great War. A particular welcome can be extended to members of the Rolls Royce Enthusiats Club and to the 20-Ghost Club next time. 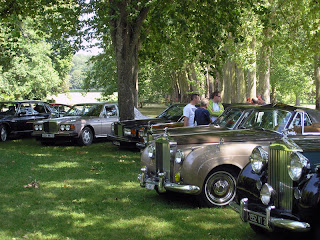 A tale of paintings, statues and busts 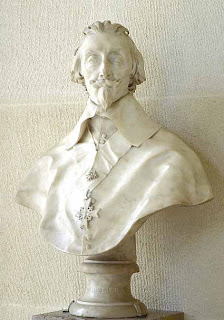 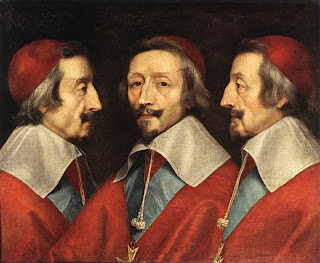 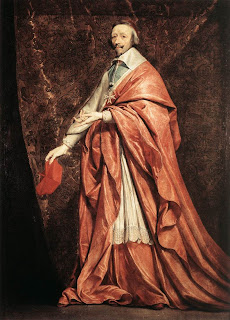 In 1640 Richelieu decided to commission a full height portrait statue from the Roman artist Gian Lorenzo Bernini (1598-1680). While ordinary high churchmen were normally painted and sculpted only at bust length, First Minister Cardinal Duke Richelieu normally had himself painted full-length as a symbol of his Power and Glory as statesman.The negotiations were entrusted to Jules Mazarin, then a trusted agent of the Cardinal (and his subsequent successor), and to Marshal d' Estrée, French ambassador to Rome. They not only had to obtain the assent of the artist himself, but also of the artist's
patrons, Cardinal Barberini and Pope Urbano VIII. Following disagreement on the part of the Pope to the plan for a full-length statue, Bernini was required to reduce the proposal to a shoulder-length bust. The celebrated Roman artist began the work in the November of 1640 and completed it in January of the following year 1641. In August the bust was taken back to Paris, where they discovered that the statue was not to be full-length as ordered. Although Mazarin fullsomely thanked Cardinal Barberini, in reality the sculpture did not please, as, despite detailed care and efforts by the artist, the face did not catch very well the true features of the Cardinal. This situation can be deduced from the later demands from the Cardinal for the preparation of another statue by the Parisian sculptor Jean Warin.

The principal court painter for Richelieu was the Paris resident Flemish master from Bruxelles, Philippe de Champaigne (1602-1674). It was he who produced the several full-length official portraits of the Cardinal, often used as diplomatic gifts; one in the Louvre (this one), and another very similar in the National Gallery in London. He was asked to produce a triple-portrait of the Cardinal to be sent to Bernini as an accurate-to-life representation of the subject of the commissioned statue as Richelieu and Bernini had never met. This stunning picture, now also in the National Gallery London is the best portrait of the French Statesman and has, behind the frame, a hand-wriiten note from Champaigne that says, artist-to-artist (and with some modesty), that the right-hand profile was the closest to life. A few years earlier van Dyke had done exactly the same type of portrait for King Charles I. These triple-portraits seem to allow one to see the individual behind the famous icon, both men late in life and not looking very well. Richelieu, often an invalid, died a couple of years later.
Posted by Abbé Henri Proust at Tuesday, July 03, 2007 1 comment: