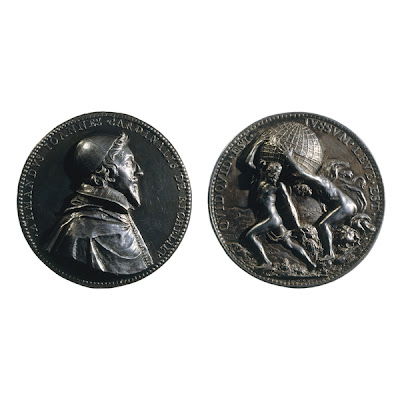 Jean Warin (1606-72) came from a family of engravers, goldsmiths and wax-modellers, which had been tainted by frequent attempts at coin forgery. His moral scruples seem to have been no different to those of his relations, as in 1629 he obtained his official place at the Paris Mint (where positions were usually decided through family connections) by seducing the wife of the then joint conductor of the Mint, René Olivier, and, very probably, arranging his murder in the Galerie du Louvre. This medal, made a year later, may have resulted from Warin's realization that his success could be bolstered by winning the favour of Cardinal Richelieu, the chief minister of the French king, Louis XIII. Made from two silver plates joined together, the piece is a masterpiece of modelling and casting. It reveals an extraordinary talent, which may have encouraged his patron to overlook his rather unorthodox methods of career advancement. 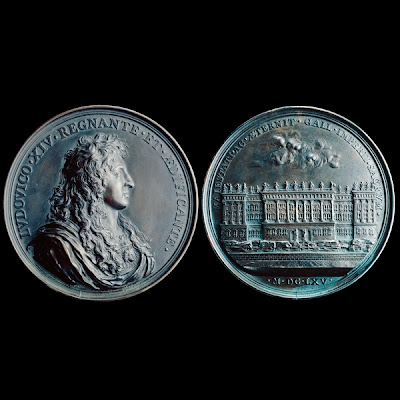 By 1665 Warin, now controller of the Paris Mint, was to be found living in an hôtel next door to the Mint (itself attached to the Louvre). He was enormously rich and also owned several other properties in the area. Louis XIV's decision to extend the Louvre must therefore have come as a blow when it became clear that some of Warin's houses would have to be demolished (with minimal financial compensation) to make way for the new building. In addition, the king had invited the renowned Italian sculptor and architect Gian Lorenzo Bernini, Warin's perceived rival, to design the palace. Warin was called upon to execute the foundation medal for the project. His resentment can only have been increased by Bernini's rush to return to Rome, so that there was not enough time to engrave dies to make the desired struck medal. In fact, its production seems to have provoked an unpleasant artistic tug-of-war between the two artists.
Posted by Abbé Henri Proust at Wednesday, June 27, 2007

Not copping with you at all !
Please Howard give your exact historical sources (who is exactly this "Abbé Henri Proust" you are refering to?) for such assumptions on this supposed "bloody" accession to as head of French Mint by Jean WARIN ?

Thanks for your comment. The Abbé must have found this text somewhere on the web in 2007; maybe we should all be skeptical about unprovable in-authorative sources! Seemed like a nice scandalous story, even if it did stretch the facts (whatever they were...)

Maybe it should be 'sceptical'...and 'non-authoritative'....