148 nice houses for sale in Richelieu! 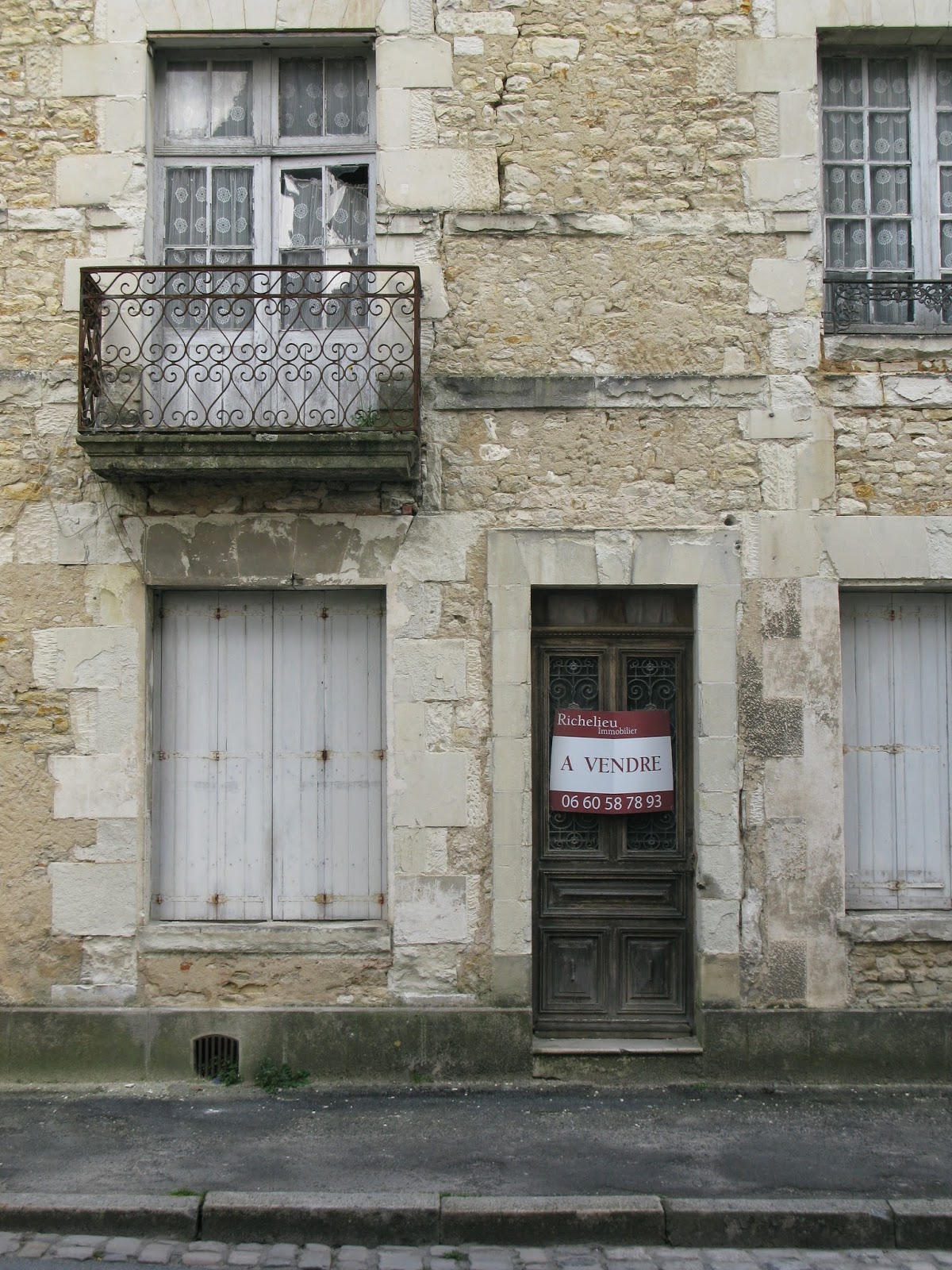 
It seems at present that almost every house in the Cité Idéale is for sale!  The French property market - like that that of France in general - is in a poor state, with sales and prices falling.

Richelieu is itself a small poor town, tucked away from more prosperous areas of 'sweet' Touraine, outside the UNESCO categorisation of special interest that applies to most of the famous châteaux of the Loire and the banks of the fleuve sauvage itself.
(The Loire is the major un-dammed river in France, from the Massif Central to the Atlantic - a grand storm drain.)

History
The Good Cardinal Duke placed his New Town on his ancestral site and hoped to make it important enough by his patronage to compensate for its 'unnatural' location.  Once his properties were built, he 'reduced' any contemporary property competition in the locality, to a radius of 25 kilometres.  Monsieur's (the King's brother) château at Champigny was demolished, for example.
All to no avail. Armand-Jean, cardinal-duc, died young at 57 years. Loudun, Chinon, ancient towns  in logical locations continued to eclipse the pompous little new town.  The King's gift of tax-free status within-the-walls became a device to avoid payments to the State right up to the Revolution (i.e. for 150 years!).  Grand houses were divided up to provide tax-exempt paper 'main residences'.  The grandiose identical 28 hôtels-particuliers were chopped up and fragmented. So the grand houses, so redolent of the 17th century, were corrupted and bastardised.

Seven succeeding dukes and the little Corsican all failed to bring much life to the town, which drifted on as a provincial town, small and less prosperous than its neighbours, but stubbornly conceited and self-conscious.  In the 19th century the château was flogged off by the cart load.  Only the romantic intervention of the Parisian banker, Michel Hein, re-assembled the parc of the former château to create today's current 'tiny-town' linked to a 400 hectare empty hunting park.

Curiously, this sad story actually preserved the town in all its completeness, all consistent in its Louis XIII period counter-reformation manner.  Too pathetic to live, but too stubborn to die. ZOMBIEVILLE!  The un-dead.

But the town remains today unique, complete, and full of authentic 17th century houses aching to be restored.

Today
The typical prosperous Parisian, stacked in his swanky apartment without garden or outside space, is not attracted to these 17th century town row houses as résidences sécondaires, as the Parisian dreams of rural gardens or larger land ownership, in order to escape the nightmare of over-developed Paris, with its famous pavement cafés and obligatory street life.  So, surprisingly, today there are few metropolitan owners within the walls (pace….!), although the entire concept of the cardinal and M Le Mercier was, from the first, an essentially Parisian conceit.

For those who live in Touraine, the properties in Richelieu are just too far away from any area of activity.  For the French, it is so much easier to live in Chinon or closer in to Tours where activity and employment are more accessible.  Too far away to commute to Tours - one bus in the morning and evening for teenage students, otherwise 50kms a day by car.  For young aspirant people…..?

For those who would wish to live within the town, where do they work?  The industrial zone is collection of derelict or failed commerce - with the exception of local building ventures.  The only larger employer, a furniture manufactory, has gone bust, after trying to re-locate production to Romania.  French businesses all sweat under the national politics of the modèle sociale (which makes French labour-costs too expensive to survive) unless one is a fonctionnaire - a state employee.  And how many state jobs like this are needed in a small distant provincial town?

Well, one might say, Richelieu is at least the centre of an immemorial agricultural economy.  True, but this places the cité idéale with a thousand competitors.  If one is a farmer, why not live on the farm?  Richelieu is hardly Madame Bovary's Rouen!

But let us not get negative!

So, to whom is this situation advantageous?