An aerial view of the old place du Marché layout 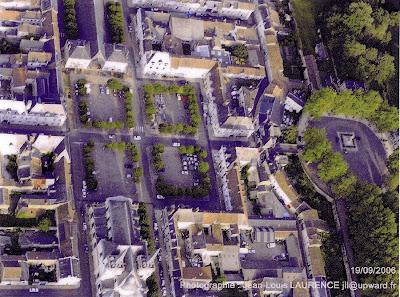 This aerial view shows the old layout of the place du Marché as it was up to September 2006, before the recently completed re-ordering.  The layout seems bizarre now that we have become familiar with the newly changed space that removed the central crossing of tarmac streets to create the open spacious pedestrian square of today.  One can see here how the old lime trees had 'a few teeth missing'.
In contrast to the other twin square, the place des Religieuses, the old layout of the place du Marché at least did not have a set of traffic lights at the intersection!  The tyranny of the motor-car!
One of the more curious effects of the new layout however concerns the sense of size of these two identically-dimensioned squares.  It is almost unbelievable that the as-yet-unchanged place des Religieuses and the place du marché are in fact the same size.  It seems to the viewer as if the place du Marché dimensions are at least 50% bigger.
As the both the Cardinal and Archit. Lemercier meant the two squares to be conceptual and layout twins, 'one for the King and one for the Cardinal', we hope the Maire and Conseil Général of Indre-et-Loire will get a move on and change the other square to match the now ravishing place du Marché.
At present in the early days of spring 2008, we look forward to the first sight of green-leaved hornbeam trees ringing the new square layout. for the first time.
thanks to Marie-Pierre Terrien for the suggestion, and Jean-Louis Laurence for the aerial photo. 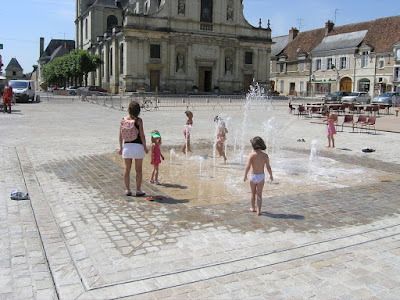 Posted by Abbé Henri Proust at Friday, February 29, 2008 No comments:

Engraving of the town by Matthäus Merian from 1657 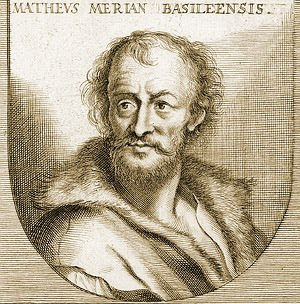 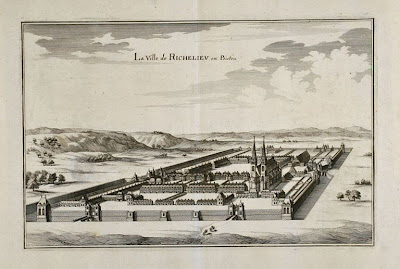 An engraving of the half-completed town from a huge and varied collection of views by Swiss-German engraver Matthäus Merian the elder (1593 - 1650), and the younger (1621-1687) his son, called "Topographiae Galliae oder Beschreib. und Contrafaitung deß Mächtigen Königreichs Frankreich. Fünfter Theil" of 1657, printed in Frankfurt am Main by Caspar Merian (son of Matthäus Merian the younger).
It seems unlikely that the engravers had actually visited the town, but rather based their depictions on other illustrations & engravings, maybe those Isräel Sylvestre, Perelle or Marot.
The portrait above is of Matthäus Merian the elder.
Posted by Abbé Henri Proust at Monday, February 18, 2008 No comments: