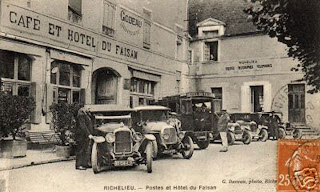 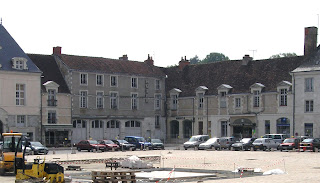 Le Faisan café and hotel is located in the south-east corner of the place du Marché.

Today standing empty, it is said to be owned by an englishman who hesitates to refurbish his property while occasionally sustaining his official hotel licence by hosting a public event. It is the second hotel located on this square, being a companion (and formerly a competitor) to le Puits Doré hotel, whose doors are said never to have closed since the foundation of the town in the 1640s.
It is sad that the locked-up building now blights that important corner of the square. And that the extended original façade (look at the additional 19th century top floor) cannot be restored to match the other original buildings that flank the complete seventeenth-century square, so recently restored to its former glory.

The upper picture taken from a postcard of about 1920 shows happier and more active days.
Posted by Abbé Henri Proust at Monday, April 28, 2008