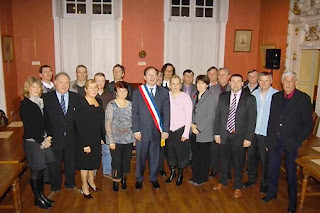 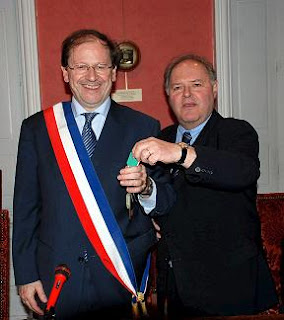 Last week HERVÉ NOVELLI was elected the new mayor of Richelieu.
He follows his colleague the out-going Mayor Pierre Gravel, who was responsible inter alia for the reconstruction of the place du Marché in '06-'07 and the purchase of 28 Grande Rue as an example of the grand houses of the town, accessible to the tourist and general visitor.  He also realised the recreation of the château of Richelieu in a 3-D digital realisation.  These three acts have made the extraordinary patrimony of the town very much more 'visible' to the visitor. While Richelieu could improve the welcome it extends to a visitor even further, these three aspects have improved the town's reception considerably.
Hervé Novelli is a Minister of State in the government of PM Francois Fillon & President Nicholas Sarkozy, with the portfolio of external trade, and now of tourism.  While he is clearly a busy chap, it is not uncommon for French government ministers to have a role as a local mayor, despite their onerous responsibilities in Paris.  It keeps their feet in the 'terroir' so to speak!  Let us hope he keeps the interest of his town of family and birth in the front of his mind!
As M.Novelli has observed, a long time ago there was once ...another Minister who came from Richelieu...
Posted by Abbé Henri Proust at Tuesday, April 01, 2008

Sounds like a useful chap to have as maire. We've got our plumber as the new maire.
Susan