Visits to the parc of Richelieu on the 'Grand Tour'. 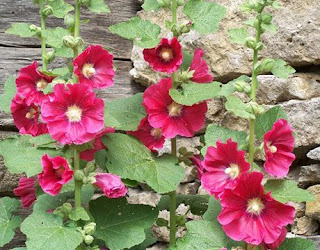 ....quoth Sir John,
"But I Hast to the castle, which is beautiously environed wt the same canale on the banks of which are such pleasant arrangements (palissades) and umbrages of tries making allies to the length of halfe a mile; in which I fand that same I had observed in the toune: the tries ranked so aequally that it is wonderfull to hear; though monstrously hy yet all of them observing such a aequality that ye sould find none arrogating superiority over his neighbour. We entred the castle by a stately draw bridge over the canale….. Of one of the balconies we descryed the garden, which was very pleasant, having a great resemblance wt that of Chateau Neuf, up and doune it ware growing Holyhaucks of all colours…"
Hollyhocks (rose trémière n.f. (Althaea rosea) still grow like pretty weeds in the gardens of Richelieu.
Sir John Lauder (Lord Fountainhall)
1646 - 1722

Judge and author of a noted journal. Born in Edinburgh, the son of John Lauder of Newington, a merchant and Bailie in the city, who had been elevated to hereditary baronetcy and bought an estate called Woodhead in East Lothian, which he later renamed Fountainhall. Having graduated from the University of Edinburgh, his father sent the young Lauder to study law in France and he recorded the details of his continental journeys in his journals. Returning in 1667, he wrote candidly about public affairs and political events in the times leading up to the 'Glorious Revolution' of 1688 and these journals are regarded invaluable by historians. He continued to record his observations on public events, legal decisions and his own thoughts for the remainder of his life, leaving extensive manuscripts which were published in the 19th century.