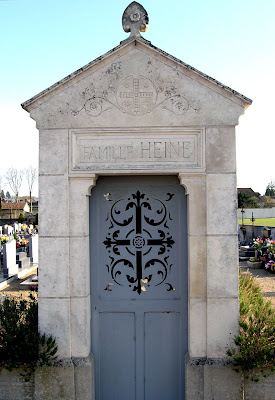 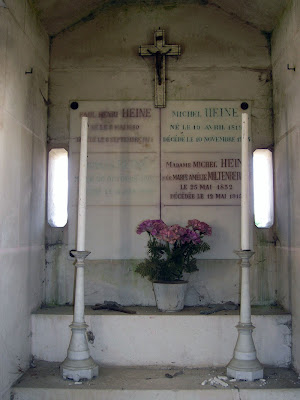 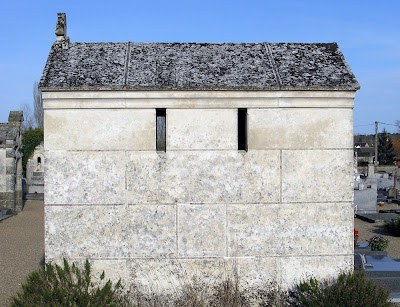 These three pictures show the tomb of the Heine family in the town cemetery located just to the north, outside the walls of the town of Richelieu.  The family is interesting as their involvement with the town resulted in the re-assembly of the domain of the château that had been broken up in the 1830s. The mega-rich banker Michel Heine, having married off his daughter Alice to the seventh duke of Richelieu - almost the last descendant of the Cardinal – elevating her to the rank of Duchess, recreated the park and remnants of the château at his own expense, including renovating the extensive water-engineering that feeds the château’s canals and the town's moat. It is really ‘his’ parc that we see today.

The tomb contains Michel, his New Orleans born wife Amélie (née Miltenberger), and their two sons Henri and Georges. Their gorgeous daughter Alice, who after five years of marriage was widowed by the sudden death of the seventh duke of Richelieu went on to marry Prince Albert I of Monaco, and is remembered among other things as the origin of a character portrayed in Marcel Proust’s book ‘Remembrances of lost time’.

When she was just 16, Alice Heine was presented to Paris society, and it didn’t take long for the attractive blonde heiress to receive offers of marriage from among France’s society elite. On February 25, 1875, Alice married Armand Chapelle, 7th Duke of Richelieu and Marquis de Jumilhac in Paris, bringing with her a substantial dowry. Although she had been raised in the Jewish faith, Alice converted to Catholicism on her marriage to the duke. The couple settled at the duke’s country estate, the Château de Haut-Buisson, and had a son, who eventually became the 8th and last duke of Richelieu, in 1875, and a daughter in 1879. When the duke of Richelieu died suddenly in 1880 after only five years, he left Alice a reported 17 million francs, making her – once again – a very sought after young woman.

Marie (or Mary) Alice Heine was born in the French Quarter of New Orleans on February 10, 1858, and was the second child of Michel Heine and Amélie Miltenberger. Michel was a jewish German who had emmigrated to New Orleans in 1843. He was the nephew of the famous German poet Heinrich Heine. Michel and his brother, Armand, left Berlin in 1840 and settled for three years in Paris before making their way to the United States, where they started their own banking house, A&M Heine. Within ten years, the company was the most successful banking operation in New Orleans, and Michel’s position was such that he was able to marry Amélie Miltenberger, the daughter of a very wealthy first-generation German-American and his creole wife, also of New Orleans. Shortly after their wedding, the young couple traveled to Paris to open a European branch of A&M Heine, and for years afterward they lived part of the year in Paris and part in New Orleans, alternating responsibilities for the businesses on each continent with Armand. The Heine brothers were as successful in France as they had been in America, and by 1863 A&M Heine was one of France’s most important banking houses. With the onset of the American Civil War, the family settled permanently in Paris, and Michel and Amélie became regulars at the court of Napoléon III. The emperor and empress became godparents to Alice and her older brother George, and A&M Heine lent the emperor a substantial sum of money in his fight against Prussia. After the emperor was defeated by the Prussians, Amélie, who was a close friend of the Empress Eugénie, was with the empress when she was forced to escape her palace in Paris for exile in England.

Well, that's not exactly correct. Actually, Alice's grandfather was of Jewish faith, her father Michel HEINE was a Christian. Her mother Amélie MILTENBERGER was a Roman Catholic. Alice HEINE herself was a Roman Catholic *by bith* and she had been christened in New Orleans. She had never been a Jewish herself. She had furthermore never converted to another religion.
Moreover, the family was already in France before the Civil War started. I have found no evidence the Empress and Emperor of the French were godparents. Yet, that's true Amélie was a intimate friend to the Empress.
Lastly, the Miltenberger family wasn't a German-American family BUT a French-American family.