These pictures show the state of the restoration of the communs (outbuildings) court of the royal palace at Fontainebleau, 50kms south west of Paris.  This cour des Offices dates from 1606-1609. The exteriors are being completed at present, and show contemporary conservation scholarship in buildings from the reign of le vert gallant, king Henri IV. 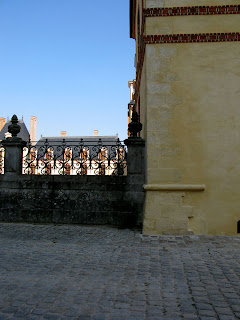 The royal court spent much time at this palace; Louis XIII himself was born there.  So the corridors of the main palace must later have heard the swish of cardinal de R's scarlet robes.  Both Richelieu and Henri IV were fascinated by building and even this grand 'new' service courtyard must have influenced the young cardinal in his ambitions in 'Poictou'. 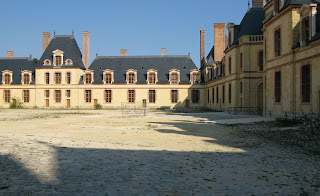 A point illustrated by this project at present is that enclosed courts and squares were often left as barren as is this current building site - no trees or garden layouts - so that carriages with multiple horses could manoeuvre sufficiently easily to deliver their aristos to their precise destinations. This open aspect really emphasises the rigour and importance of the square's elevations......as can now be seen in the new open layout of the place du Marché in the cardinal duc's own town of Richelieu. 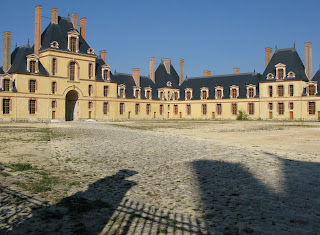 A characteristic of the 1600-1670 designs (that was to lapse in the architecture of Louis XIV and Colbert), was the use of separate 'roofkins' on each element of the plan - rather as if each element were a 'monopoly' house pushed up tight against its neighbouring block.  This results in a complex but ordered roofscape of slate pitches, valley gutters and tall chimneys; well exemplified by this particular building group. 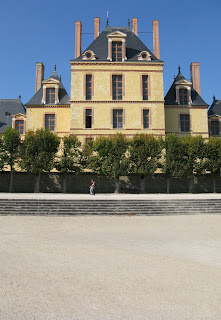 Dutch influence can be seen in the brick/stone polychromy.  This manner is characteristic of many of the structures of Henri IV, such as the place des Vosges in Paris itself.  Henri's son, Louis XIII, came to prefer the more 'Roman' use of fully cut stonework, and no doubt thought the brickwork homely and old-fashioned - definitely the work of his father's generation. 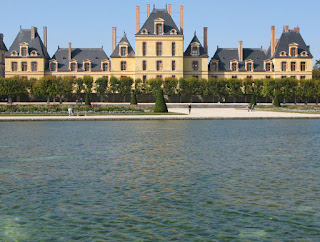