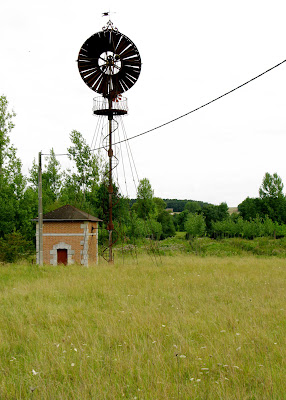 The Abbé Henri Proust, already dead before the invention of fossil-fuel-based electricity, is clearly interested in the green agenda for renewable energy supply.  So he likes the windmills conceived and manufactured by the famous engineer Ernest Sylvain Bollée of Le Mans (two hours by as yet uninvented car from Richelieu in the département of Sarthe).

This nice example served as a water pump for a 19 century chateau that lies between Azay-le-Rideau and Montbazon (see Google maps to the right).  Most of the early Bollée turbines were supplied to the aristocracy and the gentry, as certainly in this case.

Details of another wind turbine by Bollée are to be found HERE.
For true obsessives (like the Abbé himself) try HERE