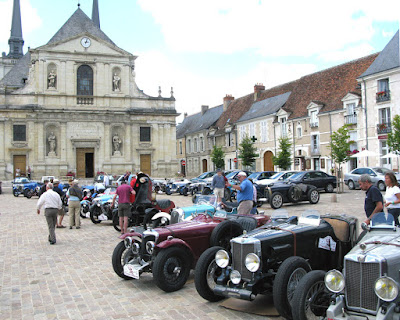 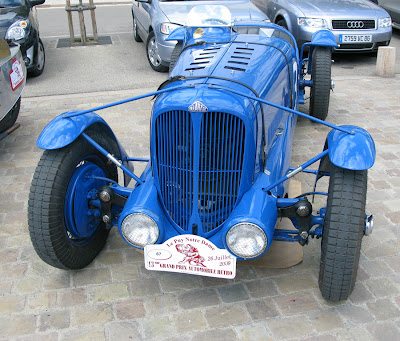 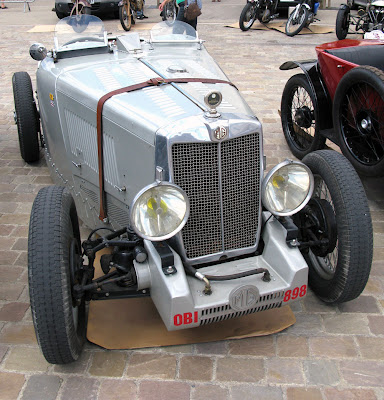 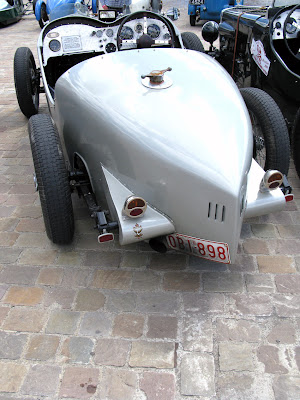 Many international car clubs are attracted by the cité idéale de Richelieu.  It is surrounded by pretty and sparsely use roads and the walled town makes a splendid mid-day arrival destination. In August 2009 the Grand Prix d'Automobiles Rétro de Le Puy Notre-Dame - a small town just south of Saumur in neighbouring département of Vienne - passed through at lunchtime and parked up in the place du marché.  Lunch was taken for all involved under the 1630s chesnut beams of la halle de Richelieu.
We feature two cars from the splendid old machines, which had to pre-date 1950.  A pre-war Delahaye 135 MS (they taught the Führer's Nazi-financed Mercedes-Benz team a lesson in 1938) and a dinky little racing MG with Belgian numberplates.  The weekend rally comprised a ballade on the Saturday and a race round the le Puy streets on the Sunday to win the Grand Prix 2009.
The cardinal himself is thought to have favoured Lotus cars - Light is Right! 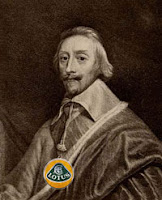 Salut Henri
Your recent report on car clubs fondness for Richelieu and sparsely used roads reminded me that there is still no news on our bypass.
Last year M.Gravel said it would 'for sure start in 2009' However although the markings appear to be pegged out in the fields no further action had been made when I was there three weeks ago. Maybe the cost is too great but you have thought the budget would have made a set aside for the project?
I had high hopes of our new Maire M. Novelli as he seems keen on the continuing preservation of the town. Maybe it's time he was lobbied about it? Have you heard anything on the grape vine?
The sizes of the lorries in the Avenue Quebec are getting bigger and the damage, unseen, probably getting worse.
Kind regards Christine

Salut anonymous Christine,
I have heard nothing; maybe someone else out there knows something?
I am sure that every Richelaise, every Richelais, looks forward to this last link in the 'trans-Touraine-no-'payage'-trucker's-route' being completed. To build so much and then hesitate so close to success!
Thanks for the comment - keep them coming plz....

Salut Henri
Further to our exchange concerning the by pass I hear from my good friend Pierre, our local notaire that it will be 2011 before our tiny by pass is built.
May be someone has the ear of our illustrious new mayor M. Novelli. Surely he could find a few euros his boss M. Sarkozy could spare for such an excellent project.
Best wishes
Christine

Thanks for the up-date, Anonymous Christine. Poor Richelieu will have to wait another couple of years. The endless steam of articulated-euro-trucks from St.Maure to Loudun & back will continue to trundle past, night and day.
p.s.When are you personally going to break cover and declare yourself?
p.p.s.You wouldn't be the only person to await the actions of our illustrious Mayor. Even the cardinal himself got stuck in Paris most of the time, but he (as in all things) dealt with the needs of his little town BY CORRESPONDENCE if Affairs of State kept him away.