In one of the wings of the palace at Fontainebleau built by Henri IV in 1606-9, one can see examples of the façade treatment similar to that of the old lost château de Richelieu. The walls were interspersed with niches - both circular and semi-cylindric, that framed statues and busts of antique heros and heroines, both mythic and historic. 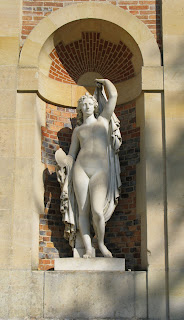 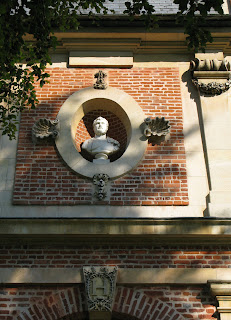 In the old engraving of the castle below this can be seen in the courtyard part-elevation lower right. It is hard to visualise this rather 'bling', seemingly over-decorated manner.  It doesn't seem so exaggerated in reality.  At Richelieu the statuary would have been inserted in an all-cut-stone ashlar wall rather than in polychrome brick/stone as at 'rural' Fontainebleau.

Have a look at this video of a CAD recreation of the château de Richelieu that shows the way it was decorated with ancient statuary. Not bad for just a few bits and bytes.