15 August - the procession for the Assumption of the Virgin Mary 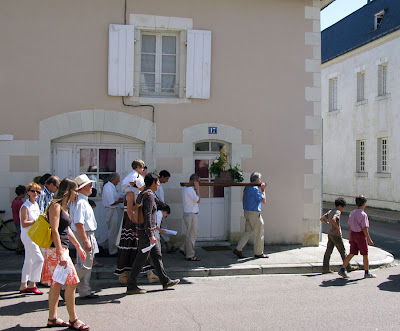 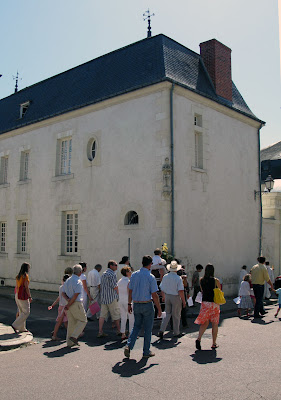 On August 15 each year the church at Richelieu celebrates the day when Roman Catholics believe that Mary was lifted into heaven.  The gilded 17th century statue* of the Virgin is taken from its usual plinth in the church and paraded through the town; in this view on its return from the statue to Mary that sits on the site of the former nunnery at the north-west corner of the cité idéale of CARDINAL duc de Richelieu and his nominated shepherd of the new town's s souls, Vincent de Paul (later canonised as Saint Vincent).
Marian worship is an important part of the Catholic faith and the acceptance of the Her Assumption to heaven is a formal Dogma of the church based on the interpretation of the faith and Papal Infallibility.  The Church hesitates still to decide whether she was alive or dead at that critical moment.  Quite a teaser, that one!
The Assumption has been the subject of many famous religious paintings, notably those of Titian and Rubens, both paintings more or less contemporary with the town's construction and St. Vincent's pastoral duties.
Assumption Day remains a public holiday in laïc France.
*actually this particular statue is a replica of the real original one stolen from the church in 2004.
Posted by Abbé Henri Proust at Friday, August 28, 2009