The cité ideale was originally completely surrounded by walls and a continuous wide moat. The little river Mable was diverted to feed the moat and protect the town walls.  Since the foundation of the town in the 1640s, many generations have hoped to benefit from this moat in various ways, as its ownership was common and, once the cardinal himself was buried, was the question; is there anyone who would object 'if I borrowed a bit'?
Holes were cut in the town walls for windows.  Original agricultural sheds, built against the town wall's interior, magically expanded into the moat and developed windows too.  The wide watery moat was reduced to a narrow trickle, and the  dry moat almost entirely backfilled.  So convenient to have a close (and free) water supply for one's vegetable garden in the summer.
Bâtiments de France want to row back; to recreate the majesty of the original concept, and around the Chinon gate, on the town's north face, this majesty can be seen, as the moat area is owned and controlled by the town itself.
But the passion for gardening, together with the French passion for 'something for nothing' has resulted in some rather fine furtive kitchen gardens.  While some have lazy or absentee gardeners, some, such as the two below, are as 'trim as a trivet'!
see Richelieu Locations on the right for an aerial view 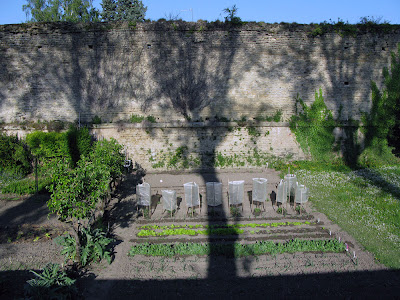 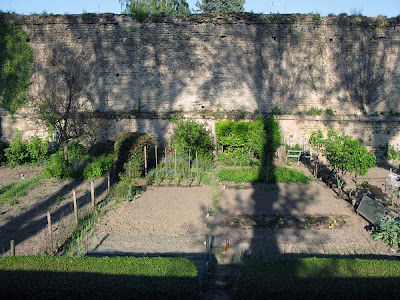