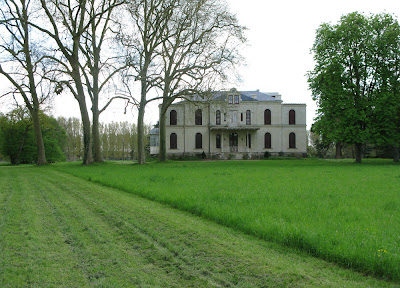 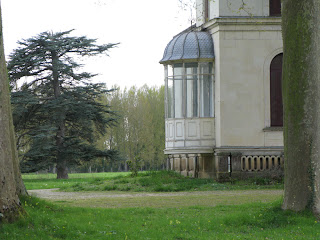 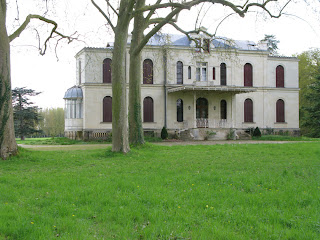 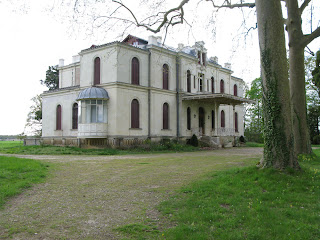 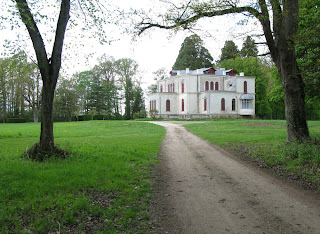 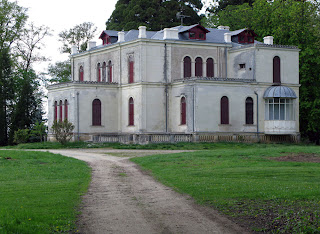 The dastardly Boutron was responsible for the demolition of the cardinal's château in the 1830s - sold off bit by bit as architectural salvage!
The parc was sold off too.
I had always felt a little nervous of the petit château, protected as it was by many 'Keep Out' notices.  Now that the parc is managed by the Conseil Général of Indre-et-Loire rather than the Sorbonne, the co-owners, deeper access seems to be permitted than before into the parc's recesses.  So I took a walk towards the isolated neo-classical villa that looks out onto the gardens of the old château.  And although its style is far from that of the 17th century, what an elegant building it is. Carl Friedrich Schinkel does Andrea Palladio in French! But of course, being in little lost Richelieu, its glories are faded, the structure unloved and there is a mood of general neglect.
The daughter Boutron sold bits of the château for forty years. Then in 1846 Mme. Boutron-Chapuis gave the old château to her nephew Jean-Francois Mélot, who in turn sold it on to banker Hyacinthe Laurence in 1852. It was he (she?) who had the Petit Château built.  Architect unknown. Sold on to Paul Hulin and then again to the family of the Parisian banker Heine, who restored the rest of the park with landscape designs by the Bühler brothers.  Finally bequeathed to the Sorbonne, the part of the University of Paris of which the cardinal had been rector - proviseur - in the 1630s, by the last and 8th duc de Richelieu.
Administered jointly by the town and the University, the Petit Château was a 'grace and favour' perk of the incumbent vice-rector of today's Sorbonne.  The Conseil Général d' Indre-et-Loire took over the efforts of the poor & tiny 'most beautiful village in the universe' * in 2005.
So to today.
* an ironic quotation of Jean de la Fontaine 1670

Having just seen a repeat of a TV film on Richard Wagner introduced by Stephen Fry, I noticed how similar this house design is to that of the Villa Wesendonck in Zurich; home of Mathilde Wesendonck, Dirty Dick's Muse for 'Tristan and Isolde' .
Posted by Abbé Henri Proust at Monday, May 18, 2009