The following is a quotation from the web site of the Departmental Conseil Général and give a statement of the work proposed for the parc de Richelieu.  It includes the statement that the old 19th century boat house will be resurrected in due course.  It was by all accounts a pretty thing, and its site is still ravishing, so we are relieved that someone somewhere loved/loves it.  We eagerly await the recreation works.
Some of the parc's bridge's handrails have already been replaced by facsimilies and look very elegant.
" The park, which is open to the public, was handled over to the Conseil général d'Indre-et-Loire in 2005 to preserve, maintain, restore and develop the 100-hectare site to its full advantage. Work to be done includes:
>> Felling dead trees, including a 160-year-old giant redwood and several bald cypresses. These will be replaced by trees of the same species in order to preserve mid 19th century landscaping.
>> Replacing the guardrails on the bridges over the canals. 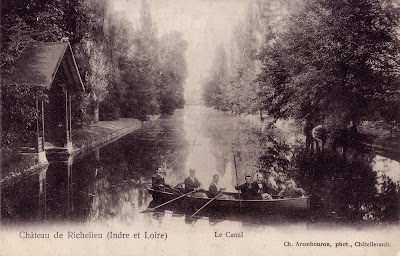 >> Dismantling and restoring the 1880 wooden landing stage: the landing stage has already been dismantled as it was threatening to fall into the canal. This remarkable Roman-style construction has been put into storage for use as a template and the rebuilt landing stage will be identical, respecting the original colours: oxblood red and ochre yellow for the balustrades.
>> Building a shop and positioning information panels.
>> Other major works planned include restoring the main canal, restoring the main locks, rebuilding the pier, and restoring the retention channel."
Posted by Abbé Henri Proust at Sunday, March 29, 2009