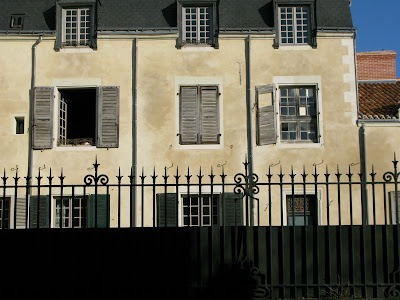 Our new friends, Catherine et Loïc, continue with the restoration of the dépendances - back extensions - of this Grande Rue mansion. The mansion was heavily adapted by a wealthy doctor in the nineteenth century, who 'updated' the old house to suit 19th century taste, as far as was possible in a row of otherwise identical 17th century hôtels particuliers. This makes it a rather 'inauthentic' but fascinating building, a 'palimpsest'* of overlaying architectural cultures. This type of situation is of particular interest to architectural historians and conservationists.
Catherine is absolutely determined to save as much as can be saved of this complex patrimony.
Not much has been done to the house since those days and the new owners have a large restoration project in front of them. Prudently, they are starting with the old servant's quarters at the back that look out onto the long sunny garden. Beyond these quarters, after the carriage 'barns', is a truely 19th century polychrome fantasia which was a serre - a greenhouse - probably for growing medicinal herbs as well as flowers, and acting as a winter-garden for the grand house. Beyond that are the stables with stalls for three horses, probably a riding horse and a pair for the doctor's carriage.
Some of the ground floor rooms of the main house have decor intact from about 1840, with plasterwork, gilding and the most florid of wallpapers from the era of Napoleon III.
A long way to go, but what a house it will be.......
to be continued

The serre or conservatory

The garden from the first floor

Colour experiments
Older posts on 13 Grande Rue
Post A and Post B
* palimpsest palɪm(p)sɛst
noun
a manuscript or piece of writing material (originally papyrus)  on which the original writing has been effaced to make room for later writing but of which traces remain.
• figurative: something reused or altered but still bearing visible traces of its earlier form.
Posted by Abbé Henri Proust at Monday, March 09, 2009

Sounds like a great project, and if they have you acting as their occasional friendly advisor, as we do, then they are very lucky.

I expect they already know, but tell them to photograph everything, everything – every detail (and they will still find there are bits they never photographed). Keep samples of the wallpaper and photograph in situ. Like lino, there are far too few records.