What does a power behind the throne do for fun?
In le cardinal duc de Richelieu's case, the bling activity of A-list celebs of the day was the collection of classical statuary and artefacts.  This fitted into the renascent classical culture that was part of many strands of Early Modern political thought; the Italian Renaissance itself, the rediscovery of all sorts of Roman relics, the study of Roman history as a guide to statecraft, the Roman-led counter-reformation, the general aping of all things Italian, Roman - ancient or modern - and the influence of the trixy queen of Henri IV, Florentine Marie de Medici, Richelieu's own first 'boss'.
If one reads Marie Pierre Terrien's book on the town and its history, page after page describes the collection of statuary that was assembled in the château by the cardinal, by his creatures and agents abroad.  Even the world-famous 'Dying Slave' of Michelangelo.  The Louvre groans with busts and statues from Richelieu's collection to this day.
Richelieu identified himself wih Hercules - Herakles in Greek - he of 'the twelve labours'.  So statues of his own particular hero were very big deal.  A famous statue of Hercules had been found at the baths of Caraculla in 1546 - the 'Farnese Hercules' - and this was the ultra-cool bling item of the Italian art world of the day. 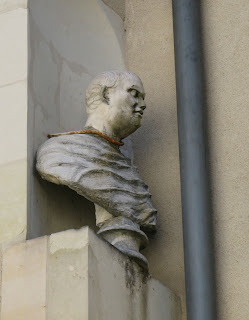 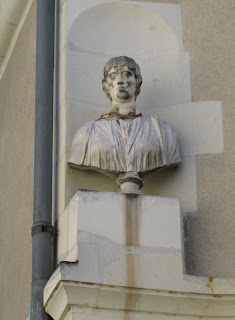 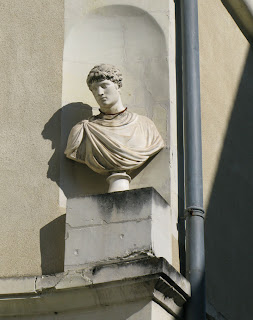 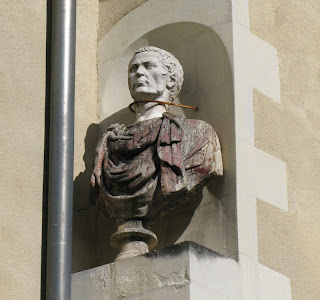 So what can be seen of this obsession today in his cité idéale?
Four busts can be seen mounted (garotted more like!) on the walls of the the the courtyard of the hôtel particulier of the 'sénéschal' - the patron's representative - of the town.  17 Grande Rue. 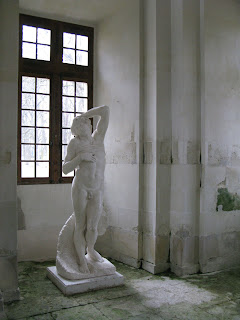 And in the Dome in the park, the last fragment of the original château, a plaster cast of the Dying Slave.  The original is (of course) in Paris.
All this has made me look at all this here-to-fore seemingly kitsch stuff with new eyes - I begin to long to start a new collection myself, ponder the location of each imagined bust and statue, consider the right height of the plinth, wonder which deity or hero might have the right allegorical resonance etc......... 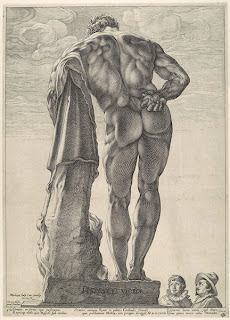 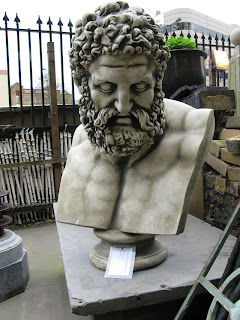 the Farnese Hercules; a 17th century engraving of his rear, and a modern bust copy of the noble head.
A gilded copy of the full-size statue was used by the celebrated gardener André Le Notre at the garden of Vaux-le-Vicomte for the banker Nicholas Fouquet.
Posted by Abbé Henri Proust at Tuesday, March 17, 2009