The problems of geometric order 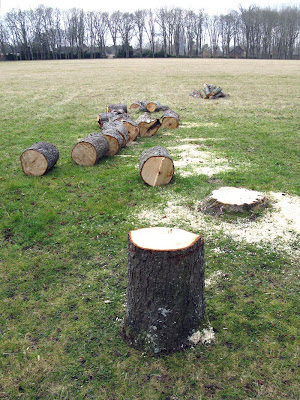 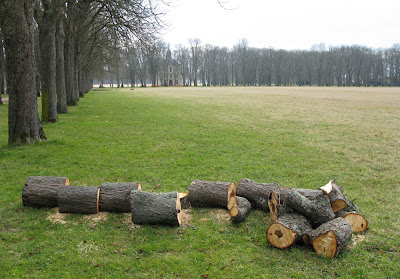 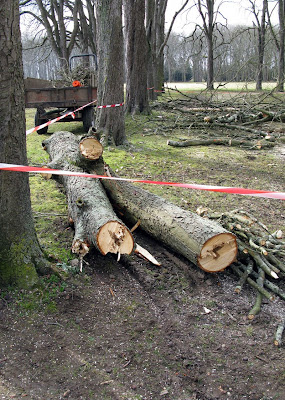 Thr parc de Richelieu comprises one of the most extravagant garden designs of its day. The 17th century new château in the form of a 'country house' - unprotected and without defensive walls - was replacing the ancient fighting castles which had still been important in the endless civil guerres de religion of the French sixteenth century.
The manner of the landscapes that flanked these new opulent large-windowed neo-classical Wonderlands was drawn from contemporary Italian projects (the Villa Lante for example) that were seen as the correct architectural inspiration; part of the general strategic counter-reformation 'project' run from the Vatican. These villa gardens had in turn had been conceived from classical Roman precedent, filtered by 16th century architects such as Vignola and Palladio.
The new designs saw much allegoric symbolism in strict geometric layouts, often reinforced by avenues and allées of trees.
As the years passed by, the country houses of Whig England in particular would initiate a garden of the picturesque - called le jardin anglais in France - typified by the famous gardens of 'Capability' Brown and Humphrey Repton.  These were neo-naturalistic gardens based on a different neo-classical allusion, the pictures of Claude Lorraine, that portrayed a free 'natural' landscape with ruins and peasant swains.
One of the problems of the French classical garden of avenues is that so trying and tedious thing, the WEATHER. The Touraine winter storms of February 2009 were savage, if slightly less so than those in Aquitaine to the south-west. But the avenues of the parc de Richelieu suffered. Many of the avenue's trees were up-ended, and the gardeners had a major effort in reducing these formerly healthy trees to log. They will of course be re-planted, once the old root has been extracted (the line must be maintained, of course), but in the meanwhile the folly and conceit of avenue planting is only too obvious, with horrible gaps giving a lie to the frail ambitions of a layout of strict geometry.
Had the designer laid it all out in the manner of a later irregular jardin anglais, few would find the storm's inheritance objectionable.
But now we, les richelais, will have to wait a long time till the 'gap teeth' of the parc's avenues are re-filled by major arboreal root-canal work.
Posted by Abbé Henri Proust at Tuesday, March 10, 2009