before and after - the mill on the Veude 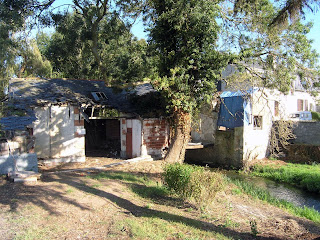 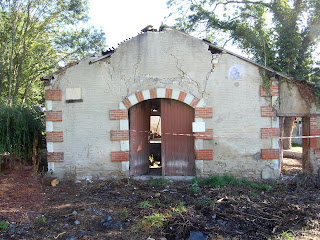 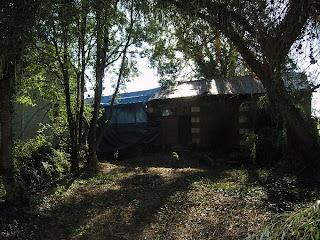 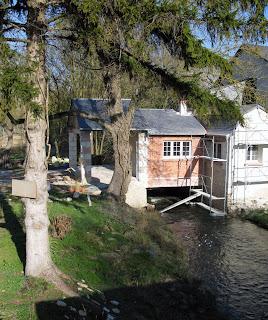 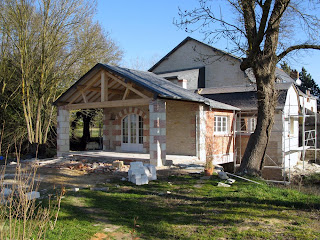 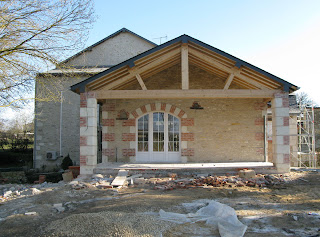 The ideal city of Richelieu is placed on the little river Mable. At the next town to the north,Champigny-sur-Veude, the Mable runs into the river Veude.  This river in its turn will run into the Vienne, and then into mother Loire at Chinon. If one back traces this river Veude up-stream south to Richelieu and beyond, one finds a string of very old water-mill locations, all of  which must pre-date the foundation of the town in the 1640s.
Close to the cité idéale is the water-mill at Chaveignes, which has recently been under restoration - or rather rebuilding.  The road bridge just in front of the mill has two arches, one presumably for the former mill run, and the other for overspill: probably a weir.  The mill run has disappeared now, but from the wreck of the old buildings one can see where the undershot mill-wheel was.  The land's shallow fall would not allow a more efficient (and picturesque) overshot wheel.
The plantation of poplars shows where the original mill pond itself must have been located as it occupies the low levels of the plot.  Poplar plantations are often an indication of frequently flooded ground - today the forestry makes a few € from otherwise unusable farm land.
Water mills are always, by their nature, close to water courses, and solid building foundations are always problematic. The restorers have rebuilt the banks, and then created a charming new version of the 19th century mill as a portico to the re-born millhouse adjacent.  Many of the former building elements have been reused, having been demounted and then carefully rebuilt.
Posted by Abbé Henri Proust at Friday, March 13, 2009