From Lord to lag in four easy steps 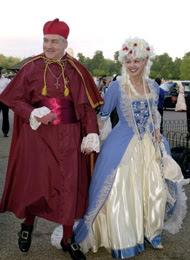 Connrad Black And His Wife, Barbara Amiel, Dressed In 18th Century Style Costumes for ball given By Prince And Princess Michael Of Kent At Kensington Palace, London. Picture: Getty Images


by JEREMY WATSON of the 'Scotland on Sunday'

IF ANY image of Conrad Black is to outlive his new infamy it surely will be the one of him taken as he arrived at a fancy-dress party dressed as Cardinal Richelieu. His glamorous wife, Barbara Amiel, on his arm as Marie Antoinette, nothing captured the newspaper mogul's keen sense of his own importance better than this 2000 snap of Black decked out in the red robes of France's 17th-century L'EMINENCE ROUGE.

As Black, a historian and converted Catholic, would have known, the cardinal's achievements have been acknowledged as consolidating royal power - that of King Louis XIII - and crushing domestic factions, although some of his methods did not stand up to ethical scrutiny. Much the same could be said of Black, who devoted a great deal of his time as head of a multinational media conglomerate to accomplish the same goals.

When Richelieu died in 1642, with his reputation as a clergyman and great statesman intact, Pope Urban said: "If God exists, Cardinal Richelieu will have to answer for many things. If not... then, yes, he will have done well in life."

There, the similarities end. Last week, 62-year-old Black - also known as Lord Black of Crossharbour, a Conservative peer - was found guilty of three charges of fraud and one of obstructing justice, and is now facing up to 35 years in jail. Justice arrived in his lifetime at the hands of an American jury; divine retribution will have to wait.

Black, the son of a wealthy Canadian businessman, told anyone who would listen during his 14-week trial in Chicago that he was on "an inexorable march to victory... my strategy is working".

Yesterday, he woke up in his suite at the city's plush Ritz-Carlton hotel to the knowledge that his strategy had failed. That he was not already behind bars is down to Judge Amy St Eve's acceptance that there would be no profit in the disgraced tycoon going on the run. Instead he was stripped of his British passport and ordered to stay in the Chicago area until a fresh bail hearing on Thursday. Given his circumstances, it is likely that Black will remain out of jail until November 30, the date scheduled for formal sentencing.
Posted by Abbé Henri Proust at Friday, August 03, 2007