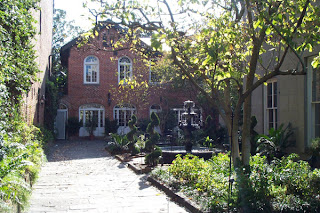 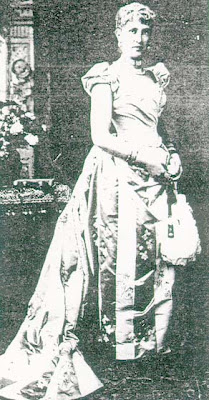 An article from the New York Times of 1889

Alice Heine (February 10, 1858 – December 22, 1925), styled HSH the Princess of Monaco and the Duchess of Richelieu, was the American-born second wife of Prince Albert I of Monaco, a great-grandfather of Prince Rainier III of Monaco. Marcel Proust used her as a model for the princesse de Luxembourg in In Search of Lost Time.
She was born Marie Alice Heine at 900 Rue Royale, in the French Quarter of New Orleans, Louisiana. Her German Jewish father, Michel Heine, was a scion of a prominent Berlin and Paris banking family and a nephew of poet Heinrich Heine. He had emigrated from Germany to Paris in 1840, moved to New Orleans in 1843, and become a successful financier and real-estate developer. Her mother was Amelie Miltenberger, an architect's daughter, whose family had built three interconnected Miltenberger mansions on rue Royale.
The American Civil War sent the family back to France, where the teenage Alice's youth and beauty, and her family's wealth, made a great impression in Parisian society. A & M Heine, her father's firm, helped finance Napoleon III’s war with Prussia.
After converting from Judaism to Catholicism, Alice married her first husband, Marie Odet Armand Chapelle, Marquis of Jumilhac, 7th Duke of Richelieu, on February 27, 1875. Their only son, Armand, became the 8th and last Duke of Richelieu on the death of his father on June 28, 1880.
Alice's second marriage, to His Serene Highness Prince Albert I of Monaco, Sovereign Prince of Monaco, occurred on October 30, 1889. The prince, whose first wife had been a daughter of a Scottish duke, was an oceanographer and during his long journeys at sea, Alice took great interest in the Monegasque opera season.
She brought a strong business acumen, showing an understanding far beyond her years. Having helped put her husband's principality on a sound financial footing, she would devote her energies to making Monaco one of Europe's great cultural centers with its Opera, theater, and the ballet under the direction of the famed Russian impresario, Serge Diaghilev. Her relationship with composer Isidore de Lara resulted in Prince Albert striking her in view of an audience at the Salle Garnier.
The Prince and Princess of Monaco separated judicially on May 30, 1902 (Monaco) and June 3, 1902 (France), but remained married. Upon the prince's death 20 years later, Alice became HSH the Dowager Princess of Monaco. She did not remarry.

From TIME Magazine Monday, Apr. 28, 1930:
"Miss Alice Heine of New Orleans became the mother of the present (and last) 8th Duke de Richelieu. Miss Eleanor Douglas Wise of
Baltimore became his wife. But he remains 100% French.
Last week the 8th Duke presented the Château de Richelieu at Richelieu in Touraine to the Sorbonne.
By the terms of gift the château and its 1,000 acres are created a "perpetual retreat" at the disposal of professors of the Sorbonne. At scholarly ease in the magnificent palace, the professors will enjoy among other things the chief product ot the village of Richelieu, "diamonds of the soil," truffles.
Marie Odet Jean Armand de Chapelle de Jumilhac, Duke de Richelieu, and his American duchess usually reside at another country place. Chateau du Haut-Buisson. nearer Paris. His Eminence the Cardinal Richelieu lies buried in the Chapel of the Sorbonne which he built and in which members of the House of Richelieu have the right to be married and buried."

The time sequence:
1 One of the inheritors of Richelieu emigrated at the Revolution and his goods were conficated in 1792.
2 Resituted much damaged to the family in 1805, the Domaine was put up for sale and bought by a goods merchant in 1832 by the name of Boutron, who acted like a real vandal and demolished the castle in order to sell the building materials. Miraculously, a range of the flank buildings escaped the massacre; the ‘Dôme’ a manege of the stable block as well as the Orangerie and the Cellars.
3 In 1852 a intermediate owner, a Mr Laurence, had a large house built called the ‘Pêtit Château’.
4 In 1877 the Park and the whole Domaine were reassembled into their territorial unity by the banker Michel Heine, who had become, following the marriage of his daughter Alice, the father-in-law of the 7th Duke of Richelieu, then the last representative member of the family.
5 In 1930, Marie-Odet-Armand Chapelle, marquis de Jumilhac, 8th duke of Richelieu, being without decendant, made the donation of the Domaine to the University of Paris, in order to show the connection with him who, before being Minister, had been rector of the College of the Sorbonne and the French university of today.

Thus it was the Alice Heine 'dowry' that made it possible to reinstate the domainal park.

Thank you Michel Heine for your profitable part in Napoleon III's battle with the Prussians, and the paternal affection that saw the Richelieu domainal estate resurrected for the benefit of your pretty daughter, her aristo husband, the Ville Idéale, the Sorbonne and today's general visitor.
Posted by Abbé Henri Proust at Saturday, August 25, 2007

I went there on 22 May 2007 at Richelieu, visited both the park of the castle and the graves in the cemetery. I'm third-cousin to Amélie Miltenberger (Madame Michel Heine), thus fifth-cousin to Armand, last duke of Richelieu.

Perhaps you know of errors in my details of Amélie's history and the Heines in general. Do point them out; blogs are always prone to the 'Wikipaedia problem' - inauthenticity of detail. Also look at the pictures of your third cousin's mausoleum on this blog.