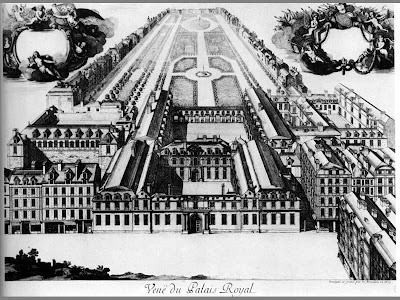 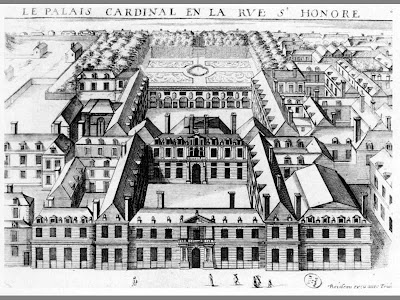 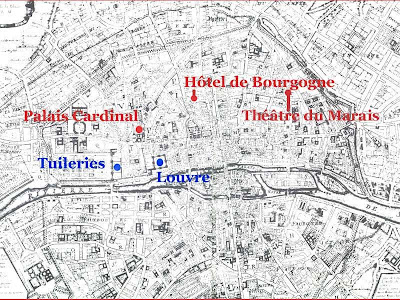 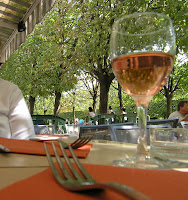 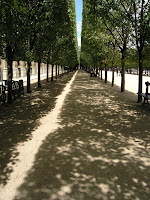 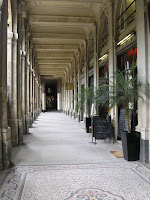 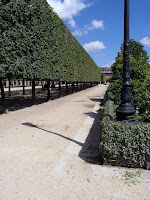 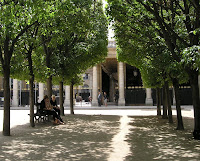 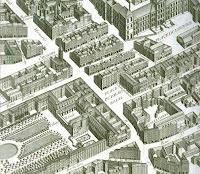 The duke cardinal Armand-Jean du Plessis was born and spent most of his life (1585 - 1642) in Paris. This blog concerns itself mainly with the Ideal Town of Richelieu and the château of Richelieu in Touraine.
However here we present pictures of the cardinal duke's Paris residence, the palais Cardinal, constructed by Richelieu using the same designer as the château: King Louis XIII's premier architect, Jaques Lemercier. Richelieu built for himself a large palais just north of the old royal castle, the Louvre, located to be accessible to the royal Court. The extensive gardens to the north reached out to touch the city walls of the day.
Today the building is used for the Conseil d'État. But the property assembled by the cardinal is still there; an island of space and tranquilty in the hugga-mugga of central Paris. A good place for lunch. On his death in 1642 he left the then-new palace to the Crown and it was eagerly adopted by Anne of Austria, Queen to Louis XIII (and regent mother of little Louis XIV) on her husband's Louis' death in 1643. In comparison, the primitive Louvre building was a less attractive palace in which to live.
The boy Sun-King spent his youth in the building and it was subsequently much adapted, rebuilt and extended. It changed its name, understandably, to Palais Royal, a title which has stuck to this day.
This situation continued in succeeding generations, so apart from small fragments, the original buildings are sadly invisible. In the 18th century the colonnades had a rather racy reputation (as did Regent Street in the twin city across the channel - shady colonnades are always attractive to the creatures of the night).
Incidentally, as a fan of the theatre (and an amateur dramatist), Richelieu had a theatre in the eastern wing where Corneille and others put on their new plays. A foundation of all French theatre.

The sonny-kingy and his yummy-mummy.
Posted by Abbé Henri Proust at Monday, October 27, 2008