The state barge of Cardinal de Richelieu on the Rhone 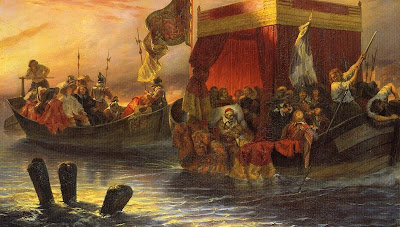 Paul Delaroche   1797-1856
"He was borne along the river Rhone in a boat in which a wooden chamber had been
constructed, lined with crimson fluted velvet, the flooring of which
was of gold. The same boat contained an antechamber decorated in
the same manner. The prow and stern of the boat were occupied by
soldiers and guards, wearing scarlet coats embroidered with gold,
silver, and silk; and many lords of note. His Eminence occupied a
bed hung with purple taffetas. Monseigneur the Cardinal Bigni, and
Messeigneurs the Bishops of Nantes and Chartres, were there, with
many abbés and gentlemen in other boats. Preceding his vessel, a
boat sounded the passages, and another boat followed, filled with
arquebusiers and officers to command them. When they approached any
isle, they sent soldiers to inspect it, to discover whether it was
occupied by any suspicious persons; and, not meeting any, they
guarded the shore until two boats which followed had passed. They
were filled with the nobility and well-armed soldiers.

"Afterward came the boat of his Eminence, to the stern of which was
attached a little boat, which conveyed MM. de Thou and Cinq-Mars,
guarded by an officer of the King's guard and twelve guards from the
regiment of his Eminence. Three vessels, containing the clothes and
plate of his Eminence, with several gentlemen and soldiers, followed
the boats.

"Two companies of light-horsemen followed the banks of the Rhone in
Dauphin, and as many on the Languedoc and Vivarais side, and a noble
regiment of foot, who preceded his Eminence in the towns which he
was to enter, or in which he was to sleep. It was pleasant to
listen to the trumpets, which, played in Dauphine, were answered by
those in Vivarais, and repeated by the echoes of our rocks. It
seemed as if all were trying which could play best."
Alfred de Vigny - 'Cinq-Mars, ou une Conjuration sous Louis XIII' - 1827

This famous work of 1829 shows Cardinal Richelieu in a gorgeous barge, preceding the boat carrying Cinq-Mars and De Thou as they are carried to the place of execution, following their conspiracy and treason.
Hippolyte (Paul) Delaroche was a French painter, born into a wealthy family in Paris on the 17th July 1797. He was determined to become an artist.
His father was successful in negotiating and cataloguing, buying and selling paintings. He was proud of his son's talent, and decided to enable his artistic education. In 1818 Paul Delaroche entered the studio of Antoine-Jean Gros. Delaroche is best known today as a representative of French Academicism.
Delaroche made his début at the Salon in 1822 with Christ descended from the cross and Jehosheba saving Joash. This established him as an artist and put him in central group of historical painters with Gericault and Delacroix with whom he became friends. The three were the central triad of a large number of historical painters the like of which has never existed before in one locality and at one time.
Delaroche's response to the Romantic challenge to the contemporary dominance of Neo-classicism was to conduct a course between these two currents. His public standing became strong with views of historic subjects expressed in popular romantic manner, painted with a solid smooth surface which gave an appearance of the highest quality finish.
His work was not always historically accurate. Cromwell lifting the Coffin-lid and looking at the Body of Charles is an incident only to be excused by an improbable tradition. The King in the Guard-Room, with villainous roundhead soldiers blowing tobacco smoke in his patient face, is a libel on the Puritans. Queen Elizabeth dying on the Ground, like a she-dragon no one dares to touch, is sensational. The Execution of Lady Jane Grey is represented as taking place in a dungeon, which is badly inaccurate.
His 1835 Assassination of the duke de Guise at Blois is an exacting historical study was well a dramatic insight into human nature. Other important Delaroche works include The Princes in the Tower and the La Jeune Martyr (a young female martyr floating drowned in the Tiber).
Delaroche died on the 4th of November 1856.
Today this painting is located in the Wallace Collection, London.
Posted by Abbé Henri Proust at Thursday, October 09, 2008

This painting is also inaccurate; only de Thou was present on that journey. But de Vigny's book is romance, not history, and representing Cinq Mars as a hero is hardly accurate either. He committed treason and sought to betray his country to the enemy in wartime; moreover, far from being a noble upholder of friendship, he betrayed the man who loved him and had done most for him: his King.

As a supporter of the architectural works or 'stones of Richelieu', it is nice to have a comment from someone which shows yet again how the Cardinal - truly 'hard but fair' (like the Pirana brothers of Monty Python fame) - has been used as colour in so many revisionist Romantic literary works. Notably the Three Musketeers of Dumas and the many films made of that theme. De Vigny too it seems. And a prop for Paul Delaroche's ghoulish themes. I say this as I think that the current neglected state of the Cité Ideale suffers still from an odd shadow in the French national mind; the 'wicked' cardinal of Dumas, the creator of the catastrophe of 'absolutism', a hero of the ancien regime, a master of spin and realpolitik before Bismarck, an anti-republican etc ec.; all of which I would assert are revisionist interpretations of hindsight. Dumas' books were as much to do with his own 1830s as the 1630s and were spun to suit his own epoch's political ends.