The façade of 14 Grande Rue 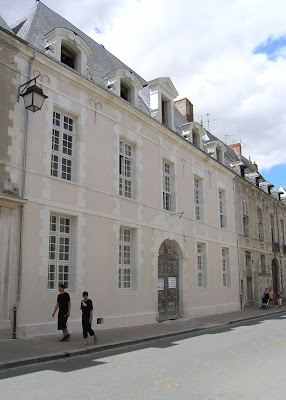 There are 28 mansions that line the Grande Rue, each originally built to the same design specification.  It is one of the largest collections of authentic seventeenth century houses in a single artistic composition in France. Until recently, several of these grand houses were in very poor condition, and finding the right use for such large houses has not been entirely easy.  They are too large for any individual's funds but too modest for a national monument. There is much earnest discussion as to appropriate use and whether 'any old use' that allows prompt restoration would be more relevant than patiently awaiting the perfect restoration context, perhaps ensuring complete and terminal dereliction.  No.14 was in truely awful condition. For a while it seemed to be in the sights of the Mairie, to act as the town's own museum mansion for visitors and tourists.  It was favoured as the particular site allows a rear public emergency exit to rue Henri Proust. But when the town chose No.28 Grande Rue instead, this building was reconceived as apartments for seniors, people in retirement (there are a lot of people en retraite in France as a consequence of the generous  provisions of the modèle sociale).
One of the wonderful aspects of buildings of this period is that they restore so well, and soon show the graceful quality of much French 17th century art.  So it is now with No.14.  There is a general policy to remove any commercial activity on the ground floor of these mansions and even if some retail is unavoidable by established rights, to restore the fenestration so that only the spandrels below the original window openings are altered. The incorporation of complete modern glassy retail façades is taboo. Commercial activity is to be encouraged in the two main squares, as was the intention of the original conception of designer Jacques Lemercier and the Cardinal Duc himself.
Posted by Abbé Henri Proust at Thursday, September 18, 2008

It looks fantastic. I only hope we can do such a nice job. I love the wheel ruts under the door. Location-wise it's a great place for a retraite, so the residents are in the middle of town and can get out and about easily on foot.