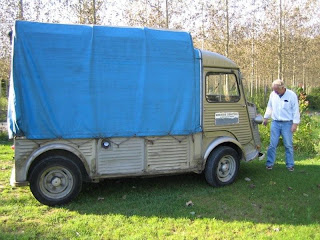 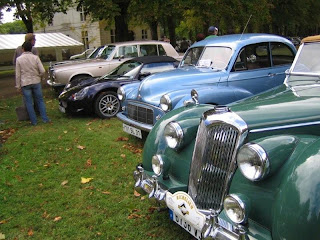 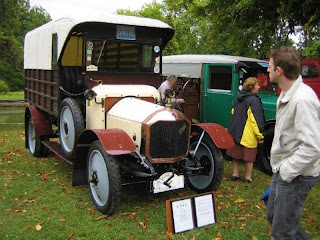 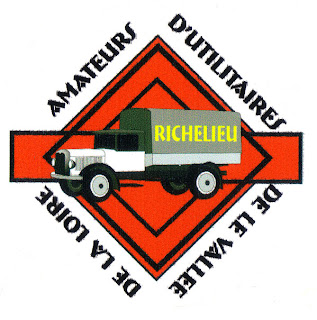 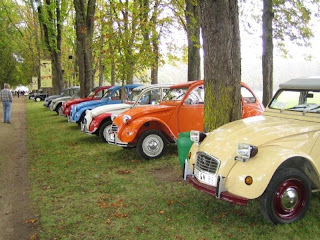 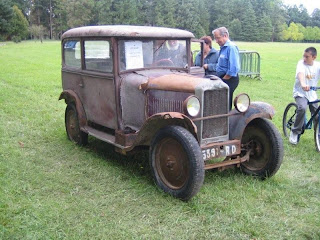 The Richelieu Festival of Locomotion is held in the domainal park of the Château of Richelieu every other year.  This year it took place on the weekend of the 6 and 7 September 2008.
Saturday is really a day of set up, but in the afternoon there was an auction of historic and sporty cars run by auctioneers from Chinon.  This year the sale included the world's largest collection of Velos Solex, the front-wheel power-assisted bicycles that seem associated with berets, onions, Gaulloises and other iconic clichés of la douce France.  Now they are a rarity as everybody drives cars.
Twenty or so ancient or sporty cars were sold off to an expectant audience, and bargains were to be had.  How much would you pay for a classic Citroën H van in rare pick-up format? - believe me, the lucky purchaser was delighted at what he paid.  The next day the main event started with a gracious tour of the locality at the speed that can be achieved by 1926 Citroën saloons, which stopped off at a château behind Fay-la-Vineuse for a vin d'honneur and a session admiring the collection of cars.  The long line of cars was protected by WW2 Willys jeeps marshalling the 2008 traffic; the military vehicles complete with very pretty girls of the Free French forces riding shotgun with the Yankee liberators. Followed of course by déjeuner together under the trees of the park.
Well done to the Amateurs d'Utilitaires de la Vallée de la Loire for the whole event.
(p.s. vallée n. f. is a valley, so surely de la vallée rather than de le vallée?
Quelle horreur!!)
thanks to Susie for the pictures - Abbé Henri Proust's old Box Brownie is acting a bit dickie at the moment...

Awww! We missed it – it looks fab.