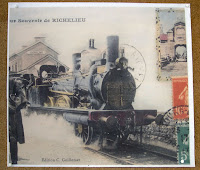 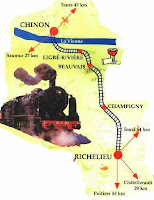 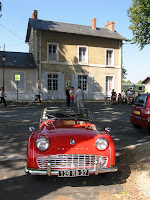 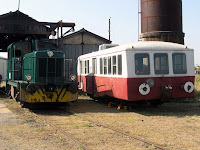 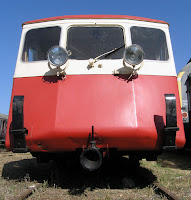 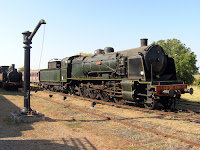 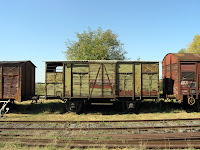 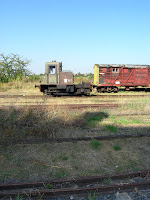 This group of enthusiasts are trying to keep open the pretty 10-mile long branch railway line from Richelieu Terminus, through the land of Rabelais' Gargantua, across the Vienne river to mediaeval Chinon. The line, which was opened in 1880 and worked well until the second World War, carried everybody to and fro to connect with the SNCF at Chinon station. And then on to Tours, Paris, Berlin, London, Venice, Istanbul ...... the World. The population did not have cars or planes then, and public transport changed the life of country people; furthermore Richelieu was quite a centre of the livestock trade, supplying Paris with their veal escalopes. But after 1945 the traffic dropped and smaller diesel rail-cars replaced the older steam locomotives with their expensive labour and overhead costs - 12 hours to steam up!
TVT has amassed quite a collection of listed historic locomotives and railway wagons - several unique examples of their class. But 10-year pressure testing for the steam boilers means that much financial support is required on a continuing basis. Furthermore insects have now attacked the railway line sleepers themselves and they now require substantial renovation or replacement. There are also engineering problems of alignment for the tracks after new roadworks have carelessly encroached on railway off-sets.

A case has been made to the Departmental authorities of Indre-et-Loire (37) including a business plan that includes use of the line for film work as well as simple tourist traffic. Many film directors have found that the line and station is ideal for their projects, and it often appears in films representing the 'Old France' of the earlier 20th century period. The director Bernard Tavernier is just one example.

Nonetheless the charm and potential of a full restoration is clear. and the enthusiasts keep this possibility alive with active events. There have been no moving trains since 26 December 2004, when the last steamer made the half-trip to neighbouring Champigny-sur-Veude.

Come on! all you toy train fans! - keep this Big-Boy Toy operating! It is hard to imagine a more suitably compact, beautiful, unspoiled line to restore.

The web log of the TVT with many videos.
Posted by Abbé Henri Proust at Thursday, September 27, 2007