the other bloke; l'Eminence Grise 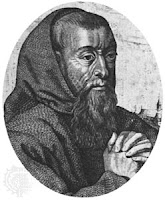 François Leclerc du Tremblay (1577–1638), also known as Père Joseph, was a French Capuchin friar, confidant and agent of Cardinal Richelieu. He was the eldest son of Jean Leclerc du Tremblay, president of the chamber of requests of the parlement of Paris, and of Marie Motier de Lafayette. As a boy he received a careful classical training, and in 1595 made an extended journey through Italy, returning to take up the career of arms. He served at the Siege of Amiens in 1597, and then accompanied a special embassy to London.
In 1599 Baron de Mafflier (by which name he was known at court) renounced the world and entered the Capuchin priory of Orleans. He embraced the religious life with great ardour, and became a notable preacher and reformer. In 1606 he aided Antoinette d'Orleans, a nun of Fontevrault, to found the reformed order of the Filles du Calvaire, and wrote a manual of devotion for the nuns. His proselytizing zeal led him to send missionaries throughout the Huguenot centre.
He entered politics at the Conferences of Loudun, when, as the confidant of the Queen and the Papal Envoy, he opposed the Gallican claims advanced by the parlement, which the Princes were upholding, and succeeded in convincing them of the schismatic tendency of Gallicanism. In 1612 he began those personal relations with Richelieu which have indissolubly joined in history and legend the great Cardinal and the original Éminence Grise, relations which research has not altogether made clear. He was so nicknamed for the Greyfriar's cloak that he wore over his habit, and because Éminence is a title conferred upon high churchmen.
In 1627 the friar assisted at the siege of La Rochelle. A purely religious reason also made him Richelieu's ally against the Habsburgs. He had a dream of arousing Europe to another crusade against the Turks, and believed that the house of Austria was the obstacle to that Universal European Peace which would make this possible. As Richelieu's agent, therefore, this modern Peter the Hermit maneuvered at the Diet of Regensburg (1630) to thwart the aggression of the Holy Roman Emperor, and then advised the intervention of the Swede Gustavus Adolphus, reconciling himself to the use of Protestant armies by the theory that one poison would counteract another.
Thus the friar became a war minister, and, though maintaining a personal austerity of life, gave himself up to diplomacy and politics. He died in 1638, just as the Cardinalate was to be conferred upon him. The story that Richelieu visited him when on his deathbed and roused the dying man by the words, "Courage, Father Joseph, we have won Breisach," seems to be apocryphal.
Posted by Abbé Henri Proust at Wednesday, May 30, 2007