A biography of Jacques Lemercier, First Architect to the King, Louis XIII 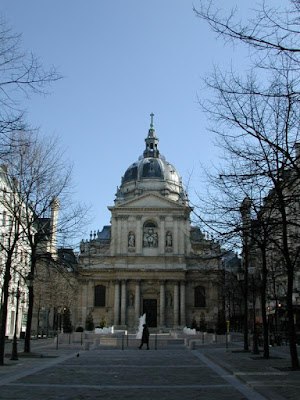 LE MERCIER, JACQUES
(b. Pontoise, about 1585 ; el. 1654)
In 1607 Le Mercier went to Rome to complete his studies. And while there he gave the
plans, Sauvai says, for the Church of Saint Louis - des - Francais, and began its
construction. Immediately on his return to France he was employed on the Louvre, with
700 livres salary. In 1613 he rebuilt the Hotel de Bouillon or de la Rochefoucauld, Rue
de Seine. Four years later, as architecte du roi, he began the old buildings at Versailles
of the Cour d'Honneur—now known as the Cour de Marbre—the nucleus round which
the whole. of the magnificent palace was to grow up in the next reign.
In 1624 one of his greatest works was begun. For in this year Richelieu ordered him to
draw up plans for the. completion of the Louvre. Le Mercier adopted Métezeau's old
plan. He proposed to add a central pavilion to the West and South wings, which were
already built. Beyond these pavilions the wings were to be repeated. And on the North
and East sides they were to be reproduced ; thus forming a vast court. This has
eventually been done : but with many modifications, of which I must speak in the next.
chapter. Le Mercier began his work by pulling down the North wing and the old Tour de
la Librairie. He built the pavillon de l'Horloge, keeping closely to the dispositions of
Lescot's work—for which he had a deep respect—in the rez de chaussez, first floor, and
attic. Above the attic he placed another storey with lofty round-headed bays, and
adorned by four groups of cariatides by Jacques Sarazin. This storey he finished with
three concentric pediments ; and crowned the whole by a lofty Dome. He then
completed the further buildings of the West side, closely copying Lescot's wing, to the
angle of the court (now Galleries of French Sculpture). And in 1640 began the North
side. He was, however, only able to finish the rez de chaussez, as far as the central
Pavilion.
While this work on the Louvre was going on, Le Mercier was largely employed in other
directions by Richelieu. In 1629 he began the Palais Cardinal, finished in 1636. This is
now the Palais Royal. And nothing remains of Le Mercier's Palace but the gallery des
Proues, facing the inner fountain court. In the same year Le Mercier furnished plans for
the Cardinal's Church of the Sorbonne, and super-intended the works until his death. In
1631 he undertook the building of the magnificent Chateau de Richelieu,) finished in
1637. And then gave plans for the Church.
He began the Church of Saint Roch in 1633, building the choir and part of the nave. In
the same year he succeeded François Mansart at the Church of Val-du-Grace, then only
10 feet above the soil. He carried it up to the cornice of the great order of pilasters. And
in 1651 built the Chapel of the Saint Sacrement. About 1635 he was appointed
architect in ordinary and first architect to the King, with a salary of 3000 livres.
The first Theatre of the Palais Royal, the Hotels Colbert, de Liancourt, and de
Longueville, engraved by Marot, etc., were Le Mercier's work. Outside Paris he built the
Chateau and Church of Rueil for Richelieu. And at Fontainebleau carried on the buildings
of the Chapel de la Ste. Trinité ; decorated the Chambre du Roi ; and replaced Gilles le
Breton's beautiful stairway in the Cour du Cheval Blanc by the existing one. As an
engineer, Richelieu made him draw up plans for a great canal round Paris, which should
contribute to its defence. But the canal was never made.
Besides his buildings, Le Mercier published Le Magnifique Chateau de Richelieu.
A noble portrait by Philippe de Champaigne, engraved by Edelinck, shows us what
manner of man was the favourite architect of the great Cardinal.
Posted by Abbé Henri Proust at Friday, May 25, 2007