Moncornet's engraving of the Cardinal 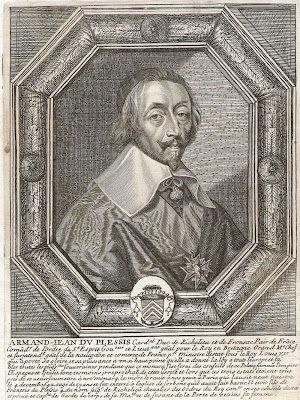 Cardinal, Duke of Richelieu and Fronsac, Peer of France, Commander of the Order of the Holy Spirit, Governor and Lieutenant-General for the King in Brittany, Grand Master and Superintendant of Navigation and Commerce of France, First Minister of State under King Louis XIII whose glory and power was carried to such a high point that he gave the law to all of Europe, and surpassed all sovereign powers while the Monarch was served by this famous political counsel. The Holy Roman Empire, Spain and Italy are irreprocable witnesses to this truth. And when these three states were very close to submission to our monarch, Death took the Cardinal from our sight in Paris, where he had been born, on 4 December 1642, aged 57 years, and he was buried in the Church of the Sorbonne, which he had himself had built. He was the son of François du Plessis, fourth of the title Seigneur de Richelieu, knight of the Order of the King, King’s privy councillor, Capitain of the Guards of His Majesty, and Susane de la Porte and Vezins, his wife.