A Short History of the town 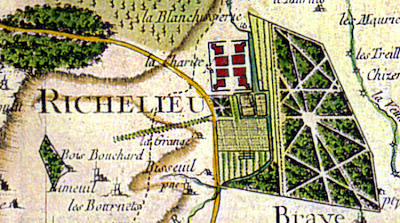 At the beginning of the 17th century, in the location of the present park at Richelieu, stood a small fortified house that had been constructed in the 12th century by the forebears of the Armand-Jean du Plessis, Cardinal Duke of Richelieu, in a place that was then called 'Richeloc'. Very attached to the family home where he had passed a part of his childhood, the Cardinal decided in about 1625 to make some improvements. Armand-Jean, then the Bishop of Luçon was promoted to Cardinal in 1622. Then in 1624 he entered the service of the King, Louis XIII, as his 'First Minister'. The modest home of his ancestors did not now suit his situation, and his political advancement pushed him towards an ambitious construction project that was worthy of comparison with the most beatiful houses of his epoc. Furthermore, he undertook to construct an adjacent town on a more or less virgin site.

The Cardinal wanted to found an 'ideal city', grandiose and unique, that would carry on his name.

If the castle has now been largely destroyed, the town remains mostly intact, much as it presented itself in the 17th century. In contrast to other French 'ideal' new towns, such as Charleville or Henrichemont, which had been founded within pre-dating urban constructions, the town of Richelieu constitutes a unique and unconstrained example of the urban design of that era. Furthermore, the town of Richelieu and its castle, united in the same concept and born of the same ambition of the Cardinal, show instructive parallels with both earlier and contemporary models of design.

Armand-Jean du Plessis, cardinal and duke of Richelieu gave his name to this town created in 1631 as an 'ideal city'. The project of the town, conceived partly as a property development, very innovative in its time, was entrusted to the brothers Jacques, Pierre and Nicholas Lemercier, architects to the King, Louis XIII 'le juste'. The development plots were given to to their future purchasers who contracted, under certain tax concessions, to build within a two year period a 'pavillon' or house of which the plans were to be to a co-ordinated design and specification. The finance was arranged by Alphonse de Lopez. Monseigneur de Sourdis, Archbishop of Bordeaux, organised the works. The entrepreneur-developers of the town were Jean Thiriot, Jean and Denis Barbet, Nicholas Durand, Jean Lamoureux and Gilles Barthélémy.
Posted by Abbé Henri Proust at Friday, May 25, 2007