This year the town council of Richelieu has taken upon itself to smarten the town up a bit by planting trees and shrubs in the straight and rather minérale streets of the 17th century 'grid' town.
Firstly, and most formally, they have installed caisses de Versailles on the boundary line of each successive hôtel particilier - mansion - on the Grande Rue.  In each caisse is planted a tapered hornbeam (carpinus betulus fastigiata), about three meters high.  Over successive seasons these will be pleached to be trim tall pyramids.  Such planting is contentious with Bâtiments de France as some think that such 'softenings' are inappropriate and out of style for the 17th century period.  This seems (to H. Proust) to be a bit strict as a point of view, as the little town has of course lived through subsequent centuries and amassed all sorts of later influences (cars, or neon pharmacy signs for example!) that change the perceived character and 'authenticity' of the town.


Despite these stylistic worries, the 24 planters have now been installed, and the effect is quite striking in such a dogmatically axial street.


Secondly, smaller matching planters have been installed on the church steps and elsewhere on the place du Marché.  While there were planters in front of the church, the new ones soften the rather naked facade.  The main trees that encircle the new square layout were omitted in front of the church, allegedly to allow large church services and particularly funerals.  A mistake in HP's view.  So these new church planters improve matters, and could be moved if circumstances require.


Thirdly, property owners not located on the Grand Rue were asked if they would like to have a plant installed in the concrete pavement, adjacent to their own house's façade.  This offer as been taken up in quite a few locations.  While the caisses will be watered by the municipal bowser, individuals will have to water their own new plantings. 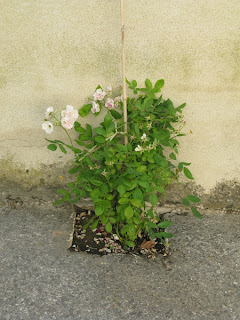 A older planting installed in the same way but now fully grown up, looks like this.
***
http://en.wikipedia.org/wiki/Hornbeam
Posted by Abbé Henri Proust at Wednesday, June 08, 2011

Hmm...I'm all for green public spaces, but those planters look like they're making the sidewalks a bit crowded! At least it seems that way in the top photo.

BTW, I finally got hold of a library copy of Toulier's book, and it's every bit as helpful as you said. Terrific illustrations, too.