Three paintings much in the taste of the cardinal duc
and his collection at le château. 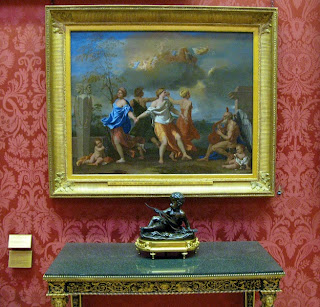 Nicholas Poussin - 'A Dance to the Movement of Time'
"These classical projections, and something from the fire, suddenly suggested Poussin's scene in which the Seasons, hand in hand and facing outward, tread in rhythm to the notes of the lyre that the winged and naked greybeard plays. The image of Time brought thoughts of mortality: of human beings, facing outward like the Seasons, moving hand in hand in intricate measure, stepping slowly, methodically sometimes a trifle awkwardly, in evolutions that take recognizable shape: or breaking into seemingly meaningless gyrations, while partners disappear only to reappear again, once more giving pattern to the spectacle: unable to control the melody, unable, perhaps, to control the steps of the dance."
Anthony Powell - 'A question of upbringing' 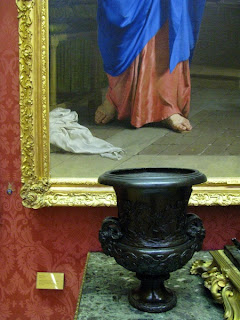 A fragment of another canvas by Philippe de Champaigne with an urn.
The Wallace Collection
***
Posted by Abbé Henri Proust at Tuesday, March 01, 2011