Bernardo Strozzi - 'The personification of Fame' 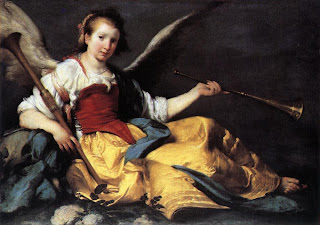 Bernardo Strozzi (1581-1664) painted it in 1635-6, and it is thought that it was displayed at the head of the grand staircase in the former château de Richelieu.


The painting is a relatively late work, probably from the early years of Strozzi's Venetian period, about 1635-6. It is a far from idealised study of a girl in a darkened setting, equipped with the wings that Fame traditionally possesses. The light falls brightly from the left, highlighting the inquiring face of the sitter and details of her costume, which shows to advantage the distinctive handling of the painter.
In representations of Fame the figure usually holds a single trumpet, or two of different lengths, symbolising good and ill fame. The significance of the two instruments represented in Strozzi's painting, a golden trumpet and a wooden shawm, is unclear; maybe trumpet for fame and shawm for infamy?
This picture is in the National Gallery London, Room 32.

Richelieu was an important patron of the arts. Portraits of him by Philippe de Champaigne are in the National Gallery collection. The 'Triple Portrait of Cardinal de Richelieu' was intended as a study for a bust by a Roman sculptor. The collection also includes this image of Fame by Bernardo Strozzi, which may have graced the entrance to his château, and Poussin's 'TheTriumph of Pan', which he had commissioned himself.