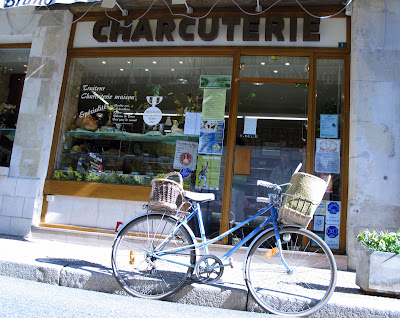 The cité idéale of Richelieu is not a wealthy town.  It has never been really prosperous since the death of the cardinal in 1642.  After all, without the great minister himself, and since the 1830s without his grand palace filled with the entourage of the succeeding dukes of Richelieu, is this not a truely isolated large village, surrounded with 30 kilometers of agricultural land in every direction? Any pre-existing centre was reduced at the cardinal's command to emphasise the hubris of the great man's new duchy.
In the nineteenth century, Paris' passion for baby white veal made Richelieu a centre for animal husbandry; place Louis XIII was a busy veal market; a large veal factory on rue Henri Proust sent its product to Paris from the grand new SNCF railway station, through Chinon on to the metropolis.  Today veal and other livestock are raised elsewhere, white veal is almost taboo and the railway line lies derelict (see photo below).
There are a few factories on the town's industrial estate on the road to Chinon, but these seem frail. The largest, Richelieu Art et Meubles de France, has now moved much of its furniture production to Romania, and the large factory seems ghostly in comparison with former days. Timber and stone construction firms seem the most active.  Ets. Merlot have just constructed a new computerised timber mill, but this seems exceptional.
Chômage - unemployment -  secondary and retirement homes (and three schools!) are today the main business of the town intra-muros.  The actual residential population within the walls must be very low; the official statistics for the town of Richelieu show 2000 souls registered at the Mairie, but only a small proportion actually live within the walls of this Touraine Pompeii.
The retail business of the town is largely conducted at the neighbouring suburb of Chaveignes where the town's few 'grand surfaces' are located; Intermarché Mousquetaires supermarket; recently expanded, a branch of the Weldom hardware franchise, the builder's merchants Colomat. But these three make a viable business by serving the car-driving population of the large agricultural hinterland that, being isolated, finds it quicker to get to Chaveignes in a car trip of a few miles (with easy parking) than the one hour trip to the mega-grand surfaces of Chambray les Tours.
This paradoxical dilemma is the reason that the town remains zombie-like; neither really dead nor really alive. This is why the extraordinary architectural feat of the town is, to this day one might say, 'in a vegetative state'.
There are a few retailers within the town itself - presumably rents are very low - and they show the much loved traditional face of la France profonde, but they seem to be closing too - last year M. Bigot's (sic) fish shop closed, with even the adjoining pompes funebres shop joining him in funereal obsequies.  Even death doesn't make enough loot to survive!!
Bruno Hulin's wonderful charcuterie however clings on, succeeding despite the lengthened charcuterie counter at the supermarket, by supplying wonderful authentic Touraine products. Here (above) is a façade to be proud of -
P.S. This reads a bit negative (even if it is largely true): I'll find a some other shops that grace the walled town to show all is not yet lost.  Maybe la belle dormante can be awakened by the right prince's kiss.

Bonjour Henri
What a depressing read. However I am pleased to say the fish shop has been reborn as a bridal outfitters with no lingering smell of fish and the Funereal business is now outside the wall of the town in much larger accomadation, so maybe there is money in death!
Although I have only owned my second home in Richelieu for two years I am pleased to see on each monthly visit signs of more and more houses being done up, and not just by Brits. There are some lovely neglected properties in the town, not just in the Grand Rue but the movement seems to be upward in restoration. Maybe us outsiders have set a trend? Certainly talking to the local French estates agents in the town they have many clients from Paris looking for good houses inside the wall. As for shops there are two general stores, Shopi and the small independent in the Grand Rue, which is where you will find a suberb family butchers. The loss of the steam railway is very sad and however the local hard the support team work to reinstate it sadly the new mayor has other plans for the site.
We looked for a long time for somewhere to buy and selected Richelieu because it had life, bussle,didn't close down in the winter and was beatiful. None of that has changed.There is little firm news on when the by pass will be started, it should be by the end of the year and looking at the area involved should not take long. I think that it will be a positive thing for the town as more people will what to buy and more people, even second homers, been more trade.
Sorry I have gone on so but I love Richelieu and whould hate to think people would be put off because they think it is dying. Au revoir.
Christine

I am sorry that I must have lapsed momentarily into the negative, but perhaps future posts RETAIL SHOPS (2) etc. will represent the Abbé Proust's more generaly positive tone.... For example only this month the 'Orangery' has opened on the Grand Rue; and as for the Fleur de Lys - tea shop, antiques and NOW courtyard RESTAURANT. And then Cyr at the Fossé - ever more artistic, and A NEW WINE BAR where the old bicycle shop was. And TWO new picture galleries, And then the new soap shop. The Bridal shop is certainly more positive than the POMPES FUNEBRES that it more or less replaces.