One of the wonderful August 2009 concerts in the Festival of Music at the Dôme in Richelieu organised by Nicholas Boyer & Gala Ringger was given in the centre of the rosegarden located in the courtyard of the old château de Richelieu, protected by the imagined inner courtyard of honour, the moat and the two arrival courtyards. Rather odd to listen to music on flute and harp in the open air surrounded by so much of the backdrop of the paintings by Watteau and Boucher of the fêtes galantes of the era of the third duke of Richelieu, himself the human model for the rakes Lovelace (Clarissa - Richardson), Valmont (les Liaisons Dangereuses - Laclos) and Octavian (Rosenkavalier - Richard Strauss - 'probably'). 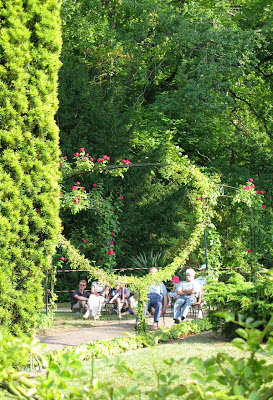 Do come to this festival of music next year - early in August 2010 - it will be sublime!