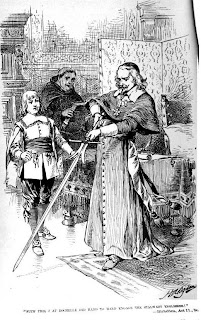 "The pen is mightier than the sword" is a metonymic adage coined by Edward Bulwer-Lytton in 1839 for his play 'Richelieu; or the Conspiracy'. The play was about Cardinal Richelieu, though in the author's words "license with dates and details... has been, though not unsparingly, indulged."
The Cardinal's line in Act II, scene II, was more fully:
True, This! —
Beneath the rule of men entirely great,
The pen is mightier than the sword. Behold
The arch-enchanters wand! — itself a nothing! —
But taking sorcery from the master-hand
To paralyse the Cæsars, and to strike
The loud earth breathless! — Take away the sword —
States can be saved without it!
* * *
The text below the image, also drawn from Act II of this play says
"With this I at Rochelle did hand to hand engage the stalwart Englisher."
Posted by Abbé Henri Proust at Monday, December 15, 2008

I'm in the middle of reading the "Testament Politique," and after reading the full "pen-is-mightier-than-the-sword" line, think the author of the play did his homework.

And I don't know if you noticed, but in the drawing, the artist rendered Richelieu's Order of the Holy Spirit as a Tudor Rose.

http://leblogdeleminencerouge.blogspot.com/search?q=esprit
shows all about the Saint Esprit. Tudor rose was based on a pentangle not a maltese cross. Well spotted.