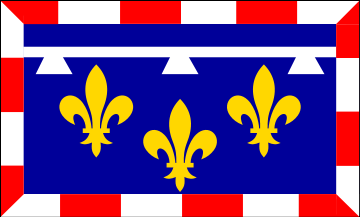 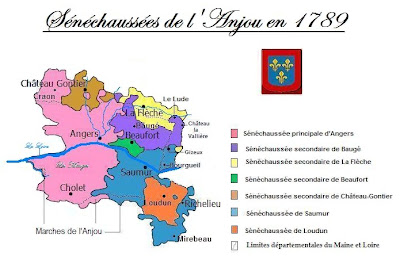 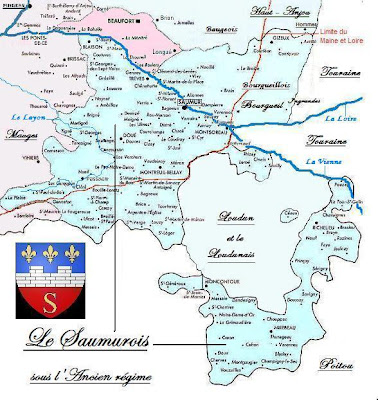 In 2008 the Cité Idéale of Richelieu is in the French administrative region called Region Centre. Population about 2.4 million.  It is located in the département of Indre-et-Loire, numbered 37, as seen on the last two digits of local car registration numbers (not for long!).
However it is talked of generally as being in Touraine, that is to say in the area to the north surrounding the city of Tours, and this is the location of the departmental Préfecture and the seat of the Conseil Général d' Indre-et-Loire.  The flag of Touraine still flies on the Richelieu town hall with the tricolor and often the flag of the EC.  Touraine is not now an officially defined area as are départements, and regions.
In the ancien régime, before the 1789 revolution, the Kingdom of France was organised into provinces up to March 4, 1790, when the centrally-imposed establishment of the département system superseded that of provinces.  Touraine (around Tours) was an ancient province, as was Anjou (around Angers) and Poitou (around Poitiers).
However Richelieu was then usually included in the province of Poitou to the south and is referred to as such in all the engravings of the period.  Touraine's houses generally have steep-pitched slate roofs, while those of Poitou have flat-pitched Roman tiles.  Richelieu's roofs are slate (ardoises) when on a grand house and roman tiles (tuiles rondes) on a humbler one.

seneschal |ˌsɛnɪʃ(ə)l| noun
1 historical the steward or major-domo of a medieval great house.
2 chiefly historical a governor or other administrative or judicial officer.
ORIGIN Middle English : from Old French, from medieval Latin seniscalus, from a Germanic compound of words meaning ‘old’ and ‘servant.’
Richelieu was formerly in the sénéchaussé of Saumur to the east, in Anjou.  This area was a rump of the larger area separated from Saumur by the area around the powerful mediaeval town of Loudun, which had its own administration.  Some alliegences were to Saumur, some to Tours, some even to Poitiers!
In the reign of Louis XIV Richelieu was included in the Généralité of Tours and thus within Touraine, but this seems to have been changed at one point to the Généralité of Saumur a least in some respects.
We are all confused.  HELP.....