Some of the streets intermuros of the Cité Idéale of the cardinal duc have been re-named, 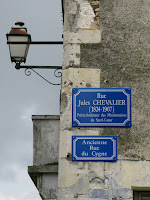 The present-day Place Louis XIII was known as the "marché aux veaux", where the veal market took place. A metallic-structure building was built in 1912 for this market, and demolished in 1986. The fountain that is now at the center of the Place Louis XIII had been placed in 1885 in the covered market building (Halle de Richelieu).

Thanks for your expert help, Aegidius. The one I am hunting at present is Paul Viau-Laurence; who he? As for my spelling error for calves....Shock horror!, now corrected.